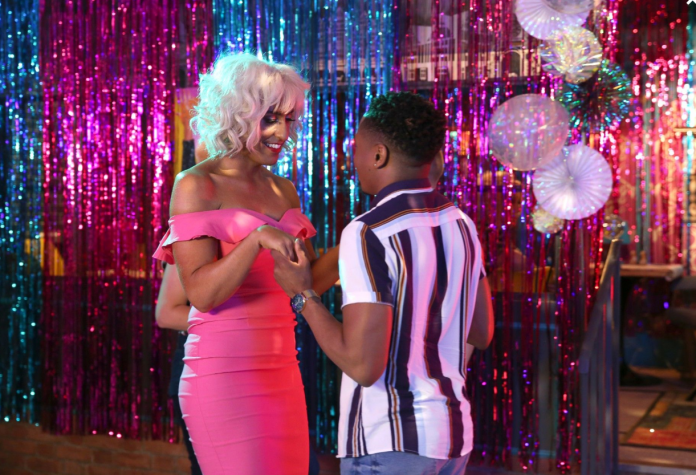 HOLLYOAKS’ Mitchell Deveraux and Scott Drinkwell are left trapped after they secretly romp as a disaster rocks the village in an upcoming episode.

Tragedy strikes in the Channel 4 soap in an upcoming episode and several lives hang in the balance, as the relationship between Mitchell and Scott heats up.

Their love affair continues to blossom after Mitchell developed feelings for his friend when he’s in his drag alter-ego Anita Tinkle.

But his betrayal hits home when Cleo McQueen contacts him to say she’s on her way back.

When she arrives, she is baffled by Mitchell’s coldness towards her when she tries to kiss him but he pushes her away.

Her mental health deteriorates and she becomes tempted to binge eat, but Mercedes spots the signs and plants an idea for her to get the spark back.

Mitchell eventually tries to break up with Cleo but changes his mind at the last minute when she tells him she’s afraid of losing him.

With Mitchell torn over what to do, he decides to keep seeing Scott behind her back and they later sneak into the Florist, unaware of the impending danger.

After hearing the commotion and seeing the emergency services, the pair try to get out only to discover the door is jammed. Will they escape in time? Discussing the storyline in August, Imran Adams previously explained: “It’s the very first time he’s feeling this, because it’s the first time he’s had an opportunity to discover who he truly is, outside of his family circle.

“That’s what Hollyoaks represents for him real life.

“Mitchell’s upbringing was very strict, but now he’s in Hollyoaks and becoming a man, he’s discovering who he really is. So as much as it’s a coming out story, it’s a coming of age story as well.”

Hollyoaks airs weeknights at 6.30pm on Channel 4, with first look screenings at 7pm on E4.

Who is Marion Logan in Coronation Street?

Rita Ora reveals coronavirus precautions as she travels back from Paris on the Eurostar...