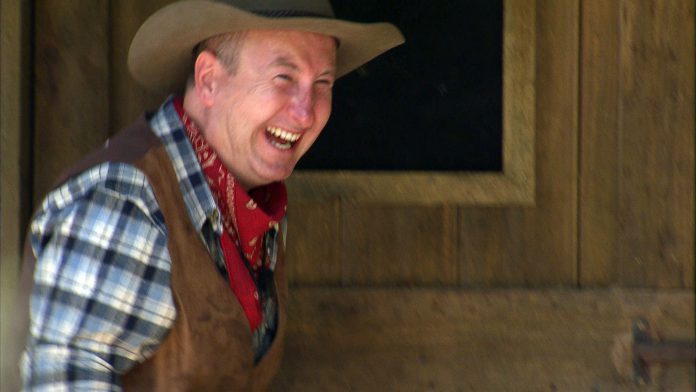 I’M A Celebrity viewers have already crowned Andrew Whyment as their winner.

The Coronation Street star – who plays Kirk Sutherland in the ITV soap – had fans in hysterics as he threw himself into the first task after becoming an outlaw in the jungle.

Andrew is the new favourite to win I’m A Celebrity

After digging through fish guts and entrails to find some trial stars he gave way to fellow newbie Cliff Parisi and took great delight in watching him suffer.

Viewers howled with laughter as Andrew egged his suffering on and said: “I love this show!”

The two were successful in winning the meals for the main camp and the main group graciously decided to share the spoils with the two soap stars.

They were locked up in the Outlaw jailhouse and soon joined by Andrew Maxwell and Kate Garraway but it was Andrew’s endearing personality that won over viewers.

He entered the jungle with fellow soap star Cliff Parisi

One wrote: “Calling it now Andrew could win this show he is hilarious

Another added: “ANDREW WHYMENT TO WIN THE JUNGLE PLS

It was also revealed tonight how Andrew had become the favourite to win the show after just one episode.

He leapfrogged former favourite Roman Kemp to become the top for Ladbrokes.

Jessica O’Reilly of the bookmakers said: “Andrew’s barely been in the jungle a minute and he’s stormed to the top of the betting.”

Who is Virginia Roberts Giuffre and how is she linked to Prince Andrew?

Simon Cowell denies affair with Mel B after girlfriend Lauren Silverman accused him in...

The 10 biggest controversies in video games

Im A Celeb camp threatened with washout final as MORE rainstorms are on the...