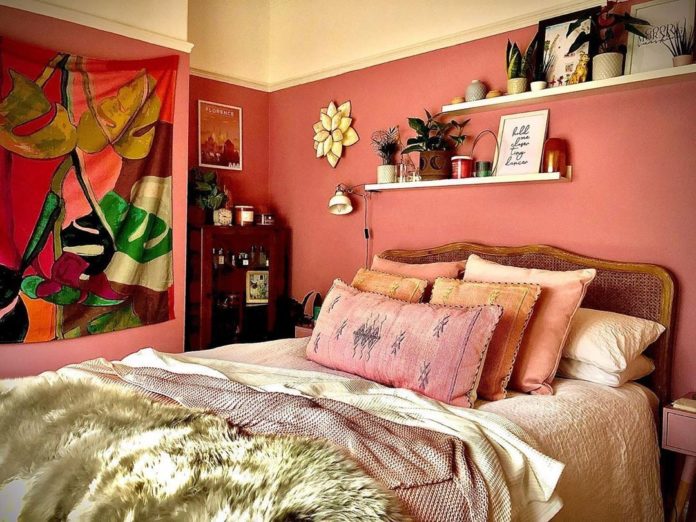 HOLLYOAKS’ Jessica Fox has renovated her Cheshire home into a quirky and colourful retro dream, with flamingo details and thoughtful gallery walls.

Following months of renovations, the 36-year-old actress, who plays Nancy Hayton in the soap, has been showing off her charming house on Instagram, after drafting in her musician boyfriend, Nicholas Willes, for some DIY.

The star has previously revealed that she served Nicholas, who toured with The Editors, a “two page list of jobs” to do on the project as they planned a major overhaul of bedrooms and her kitchen in the property.

Photos from her Instagram show her bright personality throughout the newly decorated rooms, with the star opting for flamingo, pink and sage walls.

The actress is also a fan of big bold prints, fairy lights and patterns as her home has plenty.

Her hallway features a wooden staircase, painted a variety of blue shades, while the walls match with a polka dot design.

Jessica Fox, with her boyfriend Nicholas Willes, renovated her home

The 36-year-old actress, who plays Nancy Hayton in the soap, has shown off her charming house on Instagram

Her Christmas tree sat in a bay window

The landing wall is covered from floor to ceiling in photo frames filled with artwork and album posters, while pot plants line the stairs.

A living room is painted a pale pastel colour, with a handful of pale pink and black frames on the wall holding personal photographs while a vintage drinks cabinet holds crystal glasses for special occasions.

Another picture shows a room with a leather couch, covered with a faux fur blanket, cushions and a rose gold coffee table, while a wood-burning fireplace roars and a built-in cupboard holds spare firewood. The room features a bay window, which over Christmas, Jessica used to place her Christmas tree.

Her bedroom is a pink paradise, with plants and artwork placed on floating shelves above the headboard, and a selection of throws and cushion makes the bed a cosy place to lounge.

A living room is painted a pale pastel colour, with a handful of pale pink and black frames on the wall

The stairs are painted various shades of blue

Even her bathroom is not immune from the explosion of prints and greenery, with succulents placed on her sink and a quirky cat-shaped toothbrush holder, while a Frida Kahlo-printed shower curtain hangs over the bath.

Jessica had previously shared snaps of Nick hard at work and wrote alongside one: “Death by sanding.”

While she’s not being a DIY queen, she’s a self-confessed animal lover and calls herself a “Cat-Mother” on Twitter.

Other photos show Jessica looking happy and relaxed in a striped top as she cuddles her cat, and in another, her pet sits at a table beside a bouquet of red roses.

Jess has a bright taste and loves pinks, sage and blue

The actress has shared photos of her progress on Instagram

Jessica has played Nancy for the past 15 years and has been involved in some of the show’s most dramatic storylines.

They involve domestic abuse, a menage a trois, an addiction to painkillers, two attempted rapes and an MS diagnosis.
In recent months however, Nancy rekindled a romance with ex Darren which saw her almost lose boyfriend Kyle Kelly (played by Adam Rickitt).

Kyle forgave her for the affair, and the pair resolved to get married, only to realise they were expecting a baby.

Jess has played Nancy in the soap since 2005

Viewers have seen the character go through traumatic experiences

Jess has been nominated several times for best actress awards

However, viewers saw the pair lose their baby after Nancy was taken to hospital following a stabbing in the school playground by drug dealer Mason.

Though she was originally told her baby would be okay, the baby tragically died.

The best games of 2022 for each genre

Who is Jill Halfpenny? The Drowning actress who formerly played Kate Mitchell in EastEnders