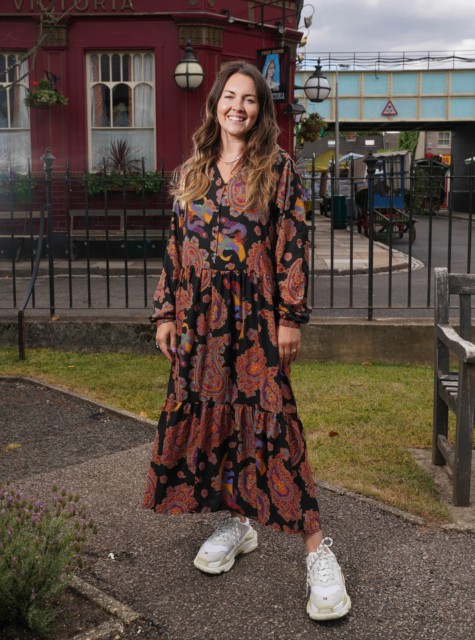 The soap star, 32, hit the Cottonmill Spa in Hertforshire with her BFF Sam Crawford for a “long overdue” spa day.

Lacey Turner, 32, is pregnant with her second child

Lacey indulged in a relaxation massage on the first class massage beds before taking a breather in the relaxation room.

The “belated birthday treats” saw the women enjoy the unbelievable views at the exclusive retreat.

“I could have stayed here all day,” Lacey revealed on her Instagram stories.

She also showed off the swinging cushion seats and lay on a cushioned lounge as she filmed one of the two hydrotherapy pools. She had a relaxing spa day with BFF Sarah Crawford The self care day was a belated birthday present for Lacey Lacey joked she could’ve stayed at the spa all day

The “most stunning relaxation room” was filled with huge beds separated by mocha coloured curtains.

Lacey shared a cute selfie alongside her friend as the pair were snuggled up in decadent spa robes.

“Had such a nice day!” she wrote on Instagram.

“A bit of self care is what we all need right now thanks @samcrawford9.” She is expecting her second baby with husband Matt Kay

The actress, 32, and husband Matt Kay have called their happy news a “miracle”.

Speaking to OK!, Lacey said: “We feel so lucky to be expecting our second baby, as it took so long to get Dusty.”

The star, who is 16 weeks pregnant, had two heartbreaking miscarriages before conceiving her daughter Dusty, who was born in July 2019.

“It took so long with Dusty,” said Lacey. “But now they’re coming along like buses! After the heartbreak we went through, it’s a miracle to fall pregnant so quickly.” She is already mum to Dusty

Both of Lacey’s miscarriages happened at seven weeks and she admits it is a “huge relief” to be further along the pregnancy.

She said: “I still feel nervous but I think I always will. I got past seven weeks, then nine weeks, and so on. They’re all milestones.

“The 20-week mark is the point I feel like I can breathe a bit easier, as it’s the halfway point. Although I went straight onto progesterone as I think that helped last time.”

Just yesterday it was revealed Lacey will be taking another break from EastEnders as her character Stacey Fowler returns to the Square following her year-long maternity leave. The Daily Star reported she’ll be gone again by the end of the year and show bosses have begun plotting her temporary exit.

A source said: “Lacey will be taking a break. The top bosses agreed to give her some time off from the show.

“This is a great opportunity for the writers to come up with something big for Lacey to get her teeth into.”

The source added that Lacey’s second comeback will be within the year and there are no plans for her to quit for good. Stacey fled the Square last year after bashing Phil Mitchell over the head and leaving him for dead.

In the meantime she split with husband Martin Fowler and moved on with a man called Jerome – while Martin has moved on with her best friend Ruby Allen. Stacey’s return is set to put the cat amongst the pigeons – and now Lacey has revealed what she wants.

She said: “I think for Stacey, she just felt angry towards Ruby – that’s supposed to be her best friend.

“She’s really sad about her and Martin. In her heart of hearts she does still love him and I think it’s quite hard her to watch them together.”

Prince Harry has suffered a lot and is just trying to protect Meghan Markle...

Premier Inn owner Whitbread to cut 6,000 jobs due to coronavirus