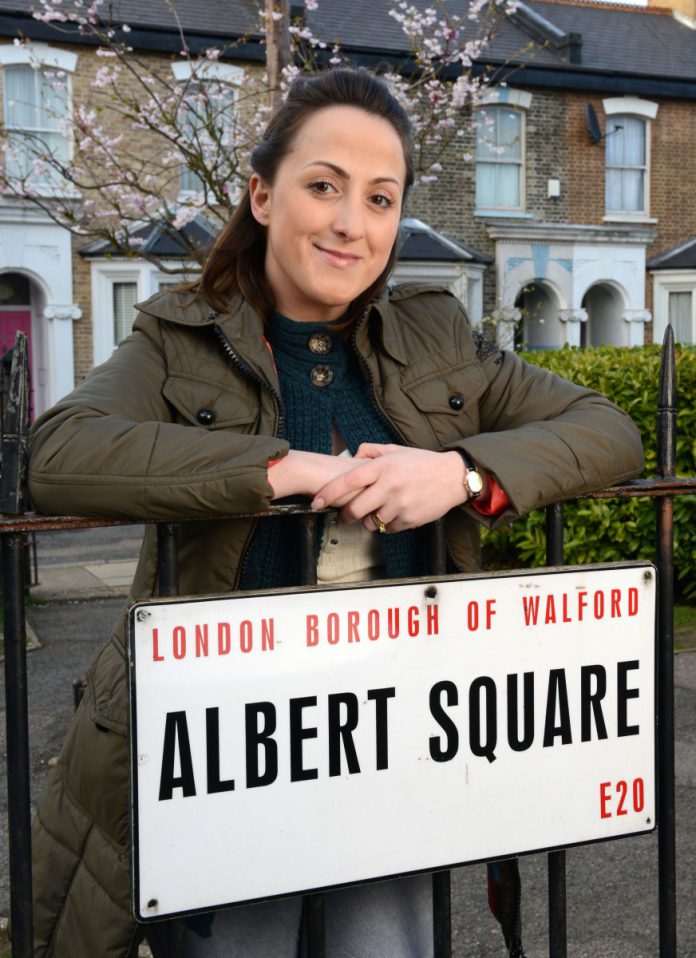 BACK in October 1993, I stepped on to the set of EastEnders.

As a ten-year-old girl, I didnt really think much about it. I was excited to be having a day off from school and spending time with my dear mum, who chaperoned me through my early years.

From the moment Dirty Den smashed down the door of Reg Coxs flat bellowing, Cor, it stinks in ere, the nation was hooked.

Since then, hard-hitting plots and storylines have been at the forefront of the show.

I feel so privileged to have been associated with EastEnders for 26 years it has been my drama school.

Dame Barbara Windsor and Wendy Richard taught me everything I needed to know when I started.

They taught me about respect for others in our workplace, and both repeatedly drummed it into me not to be late, to learn my lines and arrive on time.

These strong matriarchs will never leave me. Strong women are the lynchpin of Albert Square from the great ladies I have mentioned to now Shirley, Big Mo, Denise. Kathy, Sharon (who I shall talk about later) and to the future Stacey, Linda, Whitney and maybe even Sonia…

And of course there is one I havent mentioned yet the one and only June Brown, who plays the iconic Dot Cotton.

June has taught me the most when it comes to my acting.

Every line is like a song, dear. You need to learn it and say it with tone, high and low, soft and loud. Do not be boring and flat.

I have so much admiration for June that I still feel so privileged when I get to do scenes with her.

My on-screen mum Carol Jackson, played by Lindsey Coulson, is another person I feel honoured to have worked with.

Lindsey is one of the most incredible actors her passion for the job, her craft and the homework she puts in all shine through on our screens.

When I look back on my time with the show, I cant believe how lucky I have been not just to work alongside great actors but to be able to learn from them.

It is something I will never take for granted.

The power of soaps can never be underestimated.

The first gay kiss in a soap, in 1989, broke boundaries and changed TV history. Today EastEnders continues to do so and is recognised as helping so many people feel normal.

Other big issues have been tackled such as alcoholism played so truthfully by Anita Dobson as Angie Watts, and now by Kellie Bright as Linda Carter domestic violence, teenage pregnancy, HIV, euthanasia, racism the list is endless.

From the moment it began, EastEnders was not afraid to portray and confront real-life issues and it still strives to do so.

The feedback we, as a show, receive whenever we tackle such important subjects is often overwhelming.

We are watched by millions most nights and the audience have taken these characters into their homes and their hearts as they follow their trials and tribulations. From that, they see the show reflecting what goes on in the world as it holds a mirror up to society, highlighting issues that may be affecting them.

The storylines show people that there is help at hand while also giving them some really strong and powerful drama.

EastEnders has not just produced some of the biggest moments in British television but it also produces some amazing home-grown talent both on and off screen.
Director Tom Hooper started on the show before going on to direct so many amazing films, including The Kings Speech.

Susan Tully, who played Michelle Fowler, now directs some of the UKs biggest dramas including Line Of Duty. More recently, both Ben Hardy and Himesh Patel have launched their Hollywood careers off the back of appearing on the programme.

And now EastEnders celebrates its 35th year. I have so many highlights both as an actor and a viewer, including Sonia giving birth on the sofa, kidnapping her baby a two-hander with June Brown bringing up Bex, always loving Martin and, of course, who could forget her playing the old trumpet!

As a viewer there are too many great moments to mention, but who could forget Who Shot Phil? Or the love triangle between Bianca, Dan and Carol?

That storyline was gripping for me as a viewer, as is everything my dear friend Lacey Turner does. Her portrayal of Stacey Slaters bipolar problems was also beautifully acted.

EastEnders is not just work for me. I have grown up here and have been helped by so many people. Not only is working with Steve McFadden (Phil Mitchell) mind-blowing but he also even helped me buy my first flat!

Adam Woodyatt has also been a privilege to work with, not just on screen but off. Theres nothing better than catching up with Adam and picking his brains on where to go to dinner on a daily basis he is not like Ian Beale at all!

THE LAUGHTER WE HAVE ON SET NEVER STOPS

I also have to say I absolutely adore working alongside Jake Wood (Max Branning) and Scott Maslen (Jack Branning), who are like uncles off screen as much as they are on.

The laughter we have on set never stops.

Memories of being young in the Jacksons purple kitchen with my on-screen brother Robbie Jackson, burning toast, Carol shouting at Alan, Wellard running about and Bianca in that silver bomber jacket will always be my most favourite times to look back on. I also have to mention Sonia pushing Sharon into a hook and duck pond on the Square. We did laugh.

And now Sharon is our new matriarch an incredible iconic figure. There have always been strong women running the Square.

Laughter, tears, fun and family EastEnders has everything I need, both on and off screen.

And although off-set the odd white van man hollers: Oi Sonia, wheres your trumpet? I love to impersonate my own character by rolling my eyes and shouting: Im just doing this naaaah.

I adore Sonia, I adore EastEnders, and maybe one day your ten-year-old might even learn to play trumpet due to me.

lNatalie asked for her fee for this article to be donated to Alzheimers charities in support of Dame Barbara Windsor.