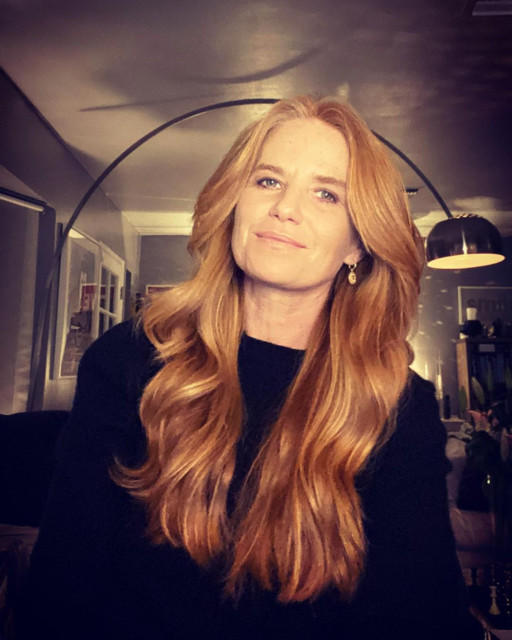 The 48-year-old star appeared to slam her laptop down on the chat after she took offence to them describing her as an “addict to wellness guru” at the bottom of the screen.

Host Susanna Reid quickly apologised and Ben Shephard said: “That was obviously a quote from Patsy’s book and it certainly wasn’t our intention…”

And now the actress has hit back on Instagram saying: “I haven’t written a book in 20 years so don’t believe that either.

“Finish it now. Thank you for all of your kind words.

“Hopefully you will all start living your best lives from now on not from then now.

“Move on we are supposed to change! It’s a human condition.

“Can’t you see how controlled we all are!”

Earlier this morning the actress simply told hosts Ben and Susanna: “I’m not doing this interview, I don’t want to do it.

“It’s not okay to have that at the bottom of the screen, I’m not going to talk to you.”

Later she took to social media to tell her fans that she did not want to speak about her “old self” and had planned to chat about her new business venture.

The TV star wrote: “My apologies to anyone that wants to hear good news as I have great faith that considering what is going on in the world right now there are still some people that do. “I keep seeing people saying ‘get over yourself’, I have gotten over my old self years ago and no longer wish to discuss it when I only have five minutes’ air time.”

The iconic actress explained that she did not want to spend her “precious five minute” interview chatting about her past addiction issues or news like Harry and Meghan.

Susanna and Ben quickly apologised, insisting that they didn’t mean for it to be offensive as they asked for her to stay.

But Patsy refused to listen – switching off her camera so that the screen went black. She was furious with the show’s caption about her

Patsy was appearing live from her home in Malibu and was cuddling her dog as she appeared via video link.

However, she seemed unimpressed from the off and wasn’t overly talkative as she stared intently at her screen.

She then leaned in even closer to read what was written under the video as Susanna asked for her views on Prince Harry and Meghan Markle. The star appeared to be unimpressed from the off Ben and Susanna were stunned by what happened

“So I’m going to switch off, do a real Piers Morgan, and just say that it’s not okay to have ‘addict to wellness guru’ at the bottom of the screen.”

As the hosts began to apologise, Patsy interrupted: “My issues… I had them years ago, they were talked about by me many, many years ago and it’s over so I’m not going to talk about it.

“I don’t really want to talk to you.”

The screen cut out as Ben clarified: “That was obviously a quote from Patsy’s book and it certainly wasn’t our intention…” Patsy had a 24-year battle with drug and booze addiction She shot to fame in EastEnders

Susanna interjected: “I had no idea that was on our screen, that’s a terrible shame – our apologies to Patsy.

“She’s entitled not to do the interview, and we carry on.”

Patsy has been open about her 20-year addiction to drug and booze in the past, having admitting to first drinking alcohol at the age of eight. Patsy has spoken openly about her battle in the past She also said that she began sniffing solvents aged 11, and snorted cocaine for the first time at 13.

The actress said that during her 1990s stint on EastEnders she’d regularly turn up to work high or hungover.

In 2010, she proudly revealed that she had been clean of drugs and alcohol since September 2004. Later in the programme, Ben and Susanna were still in shock – with Ben repeating: “Our intention was never to upset Patsy Palmer, we were very keen to talk to her.”

Susanna then referenced Piers’ dramatic exit from the programme last week, adding: “Everyone has a right not to be on this programme if they don’t want to be, as we know.”

Her ex co-host had sensationally stormed off air after his co-star Alex Beresford confronted him on comments he’d made about Meghan Markle.

Later that day, ITV announced that Piers would not be returning after he quit the show with immediate effect.

Hollyoaks’ Gary Lucy receives touching tribute from co-star as he ‘wraps filming’ ahead of...

Jesy Nelson and Chris Hughes forced apart by coronavirus as they self-isolate in seperate...