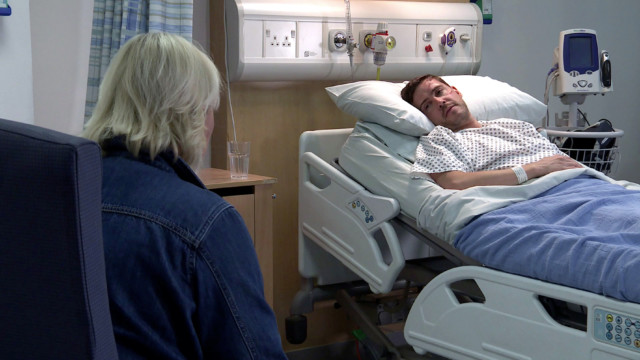 TODD Grimshaw’s feud with Shona comes to a nasty head this week as she hits him in a horror hit and run.

Here’s the lowdown on next week from the cobbles…

Todd is left for dead in a horror hit and run

1. Todd is left for dead

Viewers know that Shona and Todd are in the middle of a feud after he repeatedly wound her up by leaving the Shuttleworth hearse outside No.8.

Next week, Shona confesses to David that she hit something while moving his car – which they’ve been struggling to park recently thanks to Todd’s hearse – and drove off after panicking.

David doesn’t find anything worrying at the scene of the accident so shrugs off Shona’s concerns.

Meanwhile, however, Eileen tells Billy that Todd has been the victim of a hit and run and is fighting for his life in hospital.

Todd tells Eileen he can’t remember much about the incident when she quizzes him at the hospital.

Meanwhile, David tells Shona that he’s hidden the car and will visit Todd to test the water and see whether he remembers anything.

David is busted, however, when Craig knocks on his door and informs him they’ve found his car parked miles away with a huge dent in it.

Sarah is shocked to witness Craig arresting David on suspicion of failing to stop and report a road traffic accident.

Fiz decides to do a runner with Hope next week after realising she was responsible for the fire that nearly killed Alina.

Tyrone agrees to cover for them, telling a suspicious Evelyn that Fiz and Hope have gone to stay with Cilla.

Tyrone tells the same lies to Alina, who’s grown convinced that someone connected to the people trafficking case she was involved in is out to get her.

4. Alina reports Fiz to the police

When ​​Alina hears from Chesney that Cilla is on holiday in Cornwall, she realises Tyrone’s story isn’t adding up.

When she sees Fiz and Tyrone letting Alina and Hope into the house, her fears are confirmed and she rings the police.

Meanwhile, Tyrone catches Alina in Victoria Garden and tells her it wasn’t Fiz that started the fire – it was Hope.

Will Fiz take the blame for Hope?

​​Daisy continues to wind up Alya next week, dragging Ryan to Speed Daal to show him off and making it clear that he is her boyfriend now.

However, it all proves too much for Ryan when Daisy criticises Alya’s food and makes a jibe about her and Ryan getting together as soon as he’d split from her.

Daisy is lost for words when Ryan stands up and walks out.

6. Daisy sets her sights on Daniel

When Daniel orders a bottle of champagne in the Rovers and reveals that his mother has given him a house, Daisy’s ears prick up.

Later in the week, with Ryan off at a gig, Daisy spots an opportunity to flirt with Daniel.

Pretending she loves children, she compliments Daniel on his photos of Bertie.

Asha calls at the cafe and offers to help with the fundraising for Seb’s memorial.

Later in the week, Dev is shocked when he learns that Asha sold her new laptop to raise money for Seb’s fund.

Nina confronts Asha about the laptop but is shocked when Asha admits she still has feelings for her.

How will Nina react?

Asha tells Nina she still has feelings for her

Did you miss our previous article…
https://www.hellofaread.com/soap-opera/emmerdale-spoilers-april-windsor-crushed-as-shes-viciously-trolled-again/

Love Island stars forced to reveal if they have HERPES and vow not to...

Emmerdale spoilers: Kim Tate discovers the truth about Graham and Andrea and vows to...

Rishi Sunak will flatten North-South divide with £1.6bn to fix potholes at next week’s...