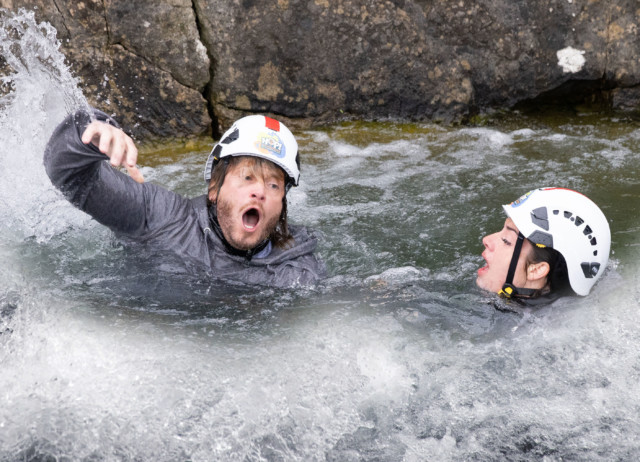 EMMERDALE bosses have confirmed that at least one villager will die in the soap’s survival week as serial killer Meena Jutla strikes again.

With 10 villagers left fighting for their lives in four deadly stunts as the events turn into a race to survive, who will lose their life? Here are the latest clues and fan theories…

Who dies in Emmerdale survival week?

First up is Victoria Sugden, who plunged down the deadly waterfall in Tuesday night’s episode as her lover David screamed out her name.

The pair had plunged into the raging river following the bridge collapse and were swept along in the current.

But while David managed to cling to a rock, Vic wasn’t so lucky and was swept over the edge of the deadly waterfall.

Spoilers have revealed that Meena will attempt to drown Victoria later this week, but will she succeed?

Emmerdale fans certainly think so, with one penning: “Omg is that goodbye to Victoria #Emmerdale? Just caught up…”

Another fan expressed their fears on Twitter: “I got a bad feeling it’s going to be Victoria”, while a third wrote: “NO, NOT Victoria too? #Emmerdale.”

Emmerdale fans are convinced Andrea Tate might end up getting caught in the firing line after she witnessed Meena glaring at Victoria in Monday night’s episode.

Spoilers have revealed that Meena will chase a mystery villager around the giant maze after they witness her trying to drown Victoria later this week.

Could it be Victoria?

One fan expressed their fears for Andrea on Twitter: “I’m scared for Andrea. I feel like she will die, I hope not I love her

Another added: “Same im glad manpreet and charles are okay. I got a feeling Victoria or Andrea are gonna die.”

Refusing to expose her revenge plan against Victoria, Meena decided to keep quiet and risk the life of her own sister in the process.

Will Meena be left with the blood of her own sister on her hands?

Fans certainly seem to think so, with one theorising: “I think Charles or Manpreet die.”

David might just have recovered from being shot in the middle of a harrowing siege, but fans think he could end up getting caught in the firing line again this week.

One fan asked: “So Victoria or David will die?!?! #Emmerdale”, while another said: “And people thought David was gonna die when Russ shot him ignoring Meena was still to return. Lol #Emmerdale.”

Some fans have predicted a huge plot twist that will see evil Meena lose her own life as she desperately tries to kill her love rival Victoria.

Talking to Metro.co.uk, she revealed: “Through all the carnage that happens, Meena could find herself in mortal danger.

“She’s so caught up in her plan and enjoying the kill that she may find herself caught up in a situation where she could potentially die.”

Might survival week be the last we see of the evil nurse? Emmerdale fans are also fearing the worst for Charles Andrea could also get caught in Meena’s firing line

Did you miss our previous article…
https://www.hellofaread.com/soap-opera/maisie-smith-shows-off-incredible-makeover-after-quitting-eastenders/

Russia could spend billions to protect its games

Royal Family news- Prince Philip RAGED ‘what the hell’ when he heard Meghan &...

Train services could be CANCELLED as up to one in five passengers are axing...