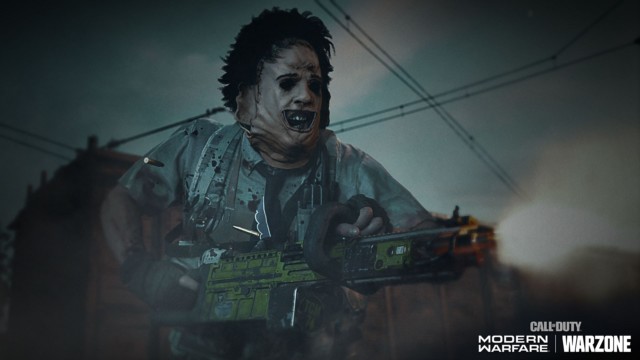 CALL of Duty is getting a spooky new update for Halloween – and it’s not for the faint of heart.

We reveal all the terrifying goodies coming in The Haunting of Verdansk.

Call of Duty is getting a huge update

This year, Call of Duty is celebrating Halloween with a major in-game event.

It’s called the Haunting of Verdansk, and will include changes to both Warzone and Modern Warfare.

Activision is also riffing on universes like Saw and Texas Chainsaw Massacre.

It’s a limited-time event, so play it while you can. Warzone is being reskinned with a nighttime theme You can dress up as SAW’s legendary puppet-villain

Call of Duty Haunting of Verdansk – start date and time

The Haunting of Verdansk kicks off on October 20.

The event is scheduled to end on November 3, so you have two weeks to enjoy all the frights on offer.

Call of Duty Haunting of Verdansk Warzone – what to expect

The entire event features a Trick or Treat reward system with special supply boxes that are good…or bad.

There are bundles based on Saw and The Texas Chainsaw Massacre. You can dress up like Billy the Puppet and wield a special throwing knife called the Phlebotomozier Lethal Equipment.

And there’s also a Leatherface outfit, with a Family Heirloom LMG blueprint that lets you wield the weapon like a chainsaw.

In select Warzone modes – including Trios – there’s a nighttime re-skin of the map.

And there’s a Zombie Royale mode where dead operators come back to life as a zombie. Winning in multiplayer will unlock this fancy garb Here’s the full roadmap for The Haunting of Verdansk

Call of Duty Haunting of Verdansk Multiplayer – what to expect

In Multiplayer, the heads of operators will turn into jack-o-lanterns after reaching three kills in a single life.

If you get to ten kills, your head will set alight – looking particularly fearsome.

You’ll find scarecrows on Domination points instead of flags, and skulls instead of dogtags for Kill Confirmed.

One is Snipers Only, which is self-explanatory.

The other is Onslaughter, where you need to take control of a Juggernaut suit and advanced forward.

In other news, check out our early take on Call of Duty Cold War’s multiplayer.

We recently spoke to one of Call of Duty Black Ops Cold War’s designers about the game’s multiplayer mode.

And, we recently spoke to Warzone’s creators about the future of the spin-off game.

Pokémon Scarlet review: It’s a buggy mess and still one of the best Pokémon games

Queen, Charles & William found out on TV as Harry and Meghan quit and...

Boris Johnson in court files over £535 outstanding debt bill from October – and...