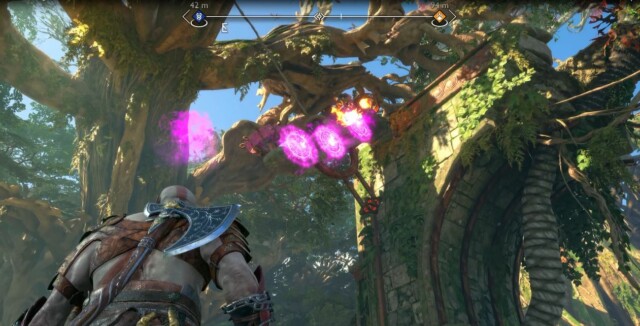 GOD of War Ragnarök is filled with upgrades, crafting materials, relics, and amulets which combine to give Kratos a powerful build.

Amulets boost your stats and can be equipped to Kratos in the menu, which you’ll need if you plan to take on the Muspelheim Combat Trials.

You need to light the torches to complete this puzzle.

One of Kratos’ more elusive amulets is the Amulet of Enchantment.

Don’t worry if you haven’t found it yet, because we’ve got it all figured out for you.

Here’s how to find the Amulet of Enchantment in God of War Ragnarök.

Where is the Amulet of Enchantment in God of War Ragnarök?

Once you’ve defeated all the enemies in Pilgrim’s Landing, there will be a ghost who will offer you the side quest Cure for the Dead.

This favour asks you to find a number of items for our undead friend. All three of these will appear on your compass.

Across the bridge to the next island, you have to first remove the vines to the left of the bridge.

Have Atreus fire a sigil arrow at the torch to ignite them and make them retreat.

You can now break the connection point with your axe. There is also one to the right you have to break in order for the bridge to fall.

One item is near a small chest on the west side of the map, which is easy enough to find.

The final item is over another bridge on the north side of the island.

Throw your axe at the connection point on the left side of the bridge, but the right point is covered in vines.

They end on a ruined archway that you can’t reach with your blades.

On the east side, there is a pair of unlit torches hanging near a large tree. Throw your axe at the connector and the torches will hang down.

Grab one with your blades, and pull it right to light the standing torch on the right side.

Create a large sigil in the middle, and fire another sigil arrow at the lit torch. This should also light up the left torch.

You can now fire a sigil arrow at the left torch to burn away the vines, allowing you to destroy the other bridge connector.

On the other side is an item and a chest containing the Grip of the Fallen Alchemist.

Once you return all three items to the spirit, they will reward you with the Amulet of Enchantment.

Did you miss our previous article…
https://hellofaread.com/technology/call-of-duty-warzone-2-0-is-almost-here-but-warzone-caldera-is-here-to-stay/