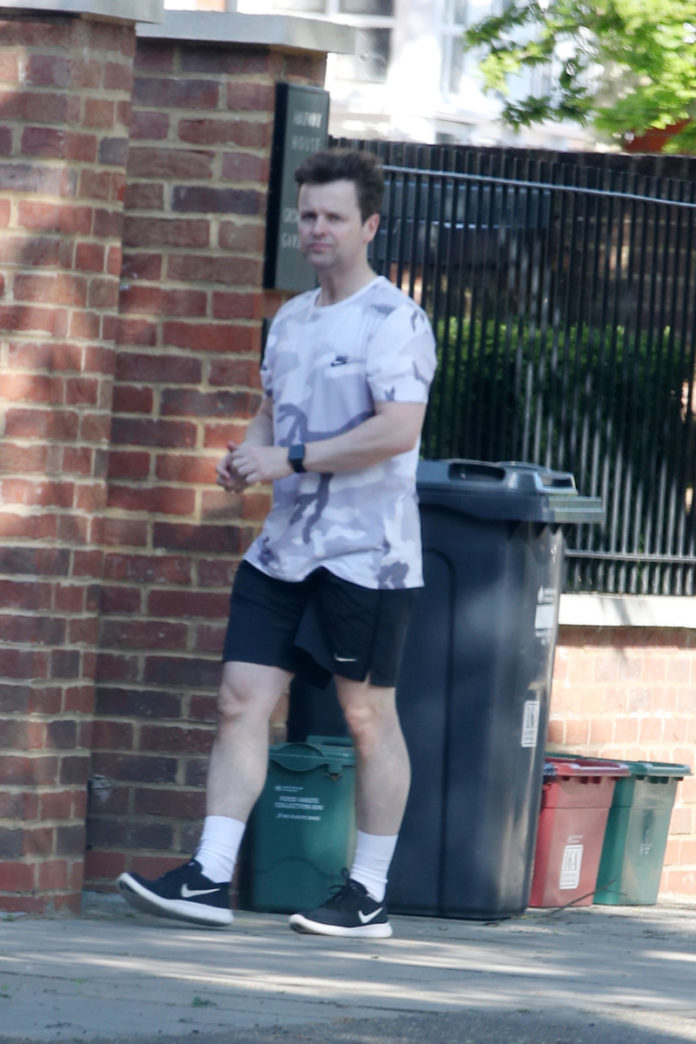 DECLAN Donnelly has been spotted enjoying the British sunshine gym shorts and camouflage top as he continues to remain in lockdown.

The popular TV presenter has been at home with wife Ali and their 19-month-old daughter, and appeared to take his government-mandated walk to fit in some household chores.

Dec kept it casual to run his chores

The family of three has been seen making the most of their daily exercise by attending local parks for a run around.

Dec was due to be back on screens for the live shows of Britain’s Got Talent, but despite the 2020 series currently airing on television, the scenes were filmed earlier this year and Dec is no doubt missing his best pal Ant McPartlin.

But it seems the pair have been keeping in touch via video calls and they have been making the most of their joint social accounts, entertaining fans with funny images instead.

In a recent Photoshopped image, the pair are seen both wearing their beloved Newcastle United kit as multiple versions of them appear around the sofa. The 44-year-old has been entertaining fans on social media He has been quarantined away from presenting partner Ant McPartlin But the two have stayed in touch through Zoom calls

One shows Ant begging in front of the screen, while another shows Dec celebrating with a scarf.

They captioned the image: “Waiting for the football season to restart like….. #nufc”

The two even did a virtual workout with one another earlier this week.

In the clip, Dec is seen challenging his best mate Ant, also 44, to an exercise session after branding him a “lazy brute” for lying on the sofa. The pair have been messing around on social media lately

Telling him to “forget Joe Wicks”, Dec promises Ant he will “give him a good beasting” before challenging him to a press-up workout.

But with a clever trick of the camera, Dec then manages to perform the moves with one hand, one finger and even goes on to clap between each one.

As Ant begins to struggle after just a few regular press-ups, which he is doing on his lounge floor, he gasps: “Huh? What? How are you doing…?!” Ant then collapses on the carpet before storming off.

Twisting the camera around to show that he was actually doing his press-ups while standing against a bathroom wall, Dec says: “Are you with me? Oh, have you gone? One come on. It was only a joke. I was just joking!” Ant fumed as Dec beat him on the challenge

The lads, who are isolating in their respective houses at the moment, posted the funny video to their joint Instagram account. Loophole that allowed furloughed wages to be used to calculate redundancy payouts closed by...

Furious Strictly fans all saying the same thing as show is moved for World...

Tier 3 lockdown rules may need to go ‘even further’ to control coronavirus, admits...