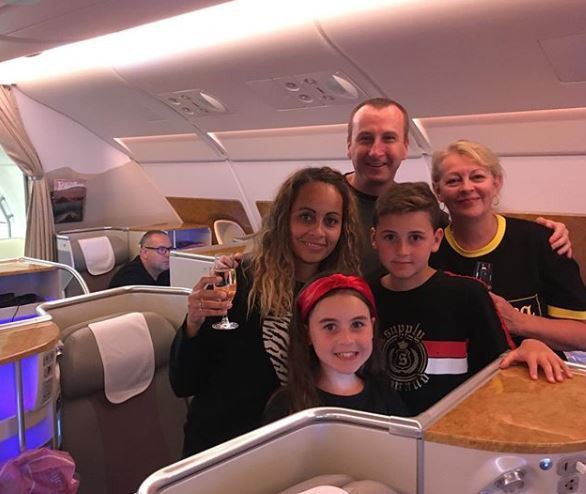 CORONATION Street star Andy Whyment is living it up in first class as the I’m A Celebrity stars begin their flights home.

The Kirk Sutherland actor is getting the final dose of the high life – as the 38-year-old has said he is desperate to get back to his “boring life” of sitting on the sofa and going to Asda.

He’s joined by his wife Nicola Willis, their children Tom, 10, and Hollie, eight, and mum Jackie at Brisbane airport.

The star was seen walking to the plane alongside his campmate Myles Stephenson, who was dressed in a basketball jersey with basketball shorts.

Roman Kemp was also on his way back with girlfriend Anne-Sophie Flury. She was wearing his camp top, with his name on the back.

Queen of the Jungle Jacqueline Jossa and Dan Osborne put their relationship troubles behind them as they made their way to the plane.

In one photo, Dan was seen picking up their youngest daughter Mia, one, as she giggled, before putting oldest daughter Ella, four, on his shoulders.

Andy said he wasn’t going to let his big payday on the show change anything about his life – as he just wants to pay off the mortgage.

He told theDaily Star: “Im looking forward to getting back and just getting into my normal boring life of just getting home from work, closing the front door and sitting on the sofa and watching telly.”

The dad-of-two added: “I know my profile is probably going to be higher now. I didnt do [the show] for that reason.

“Ill still remain myself. Ill still go to Asda on a Friday and do the big shop with my wife.”

PS5 release date: When is next-gen console out in UK and US? Price, games...

West could be forced to reconsider military intervention in Ukraine war if Putin uses...

Chaos as minister suggests UK COULD have regional travel quarantines – 24 hours after...