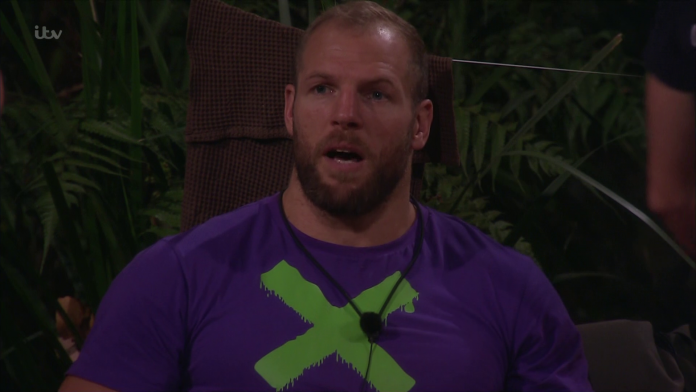 I’M A Celebrity… Get Me Out Of Here! fans have slammed James Haskell for “disrespecting” Andy Whyment AGAIN after he failed a task.

The rugby hunk was left with just rice and beans for dinner while Andy and other campmates were treated to a luxury meal for winning their own trials.

As the winners headed off for their meals, the 38-year-old Coronation Street actor told the losers that he felt bad and was sorry that they couldn’t join them.

“I’m going to ask you 30,000 times what you had and I want specific details on everything.”

Andy did not respond, with James’ remark a throwback to a row he’d had with his fellow contestant earlier this week.

Fans were furious, accusing the sportsman of “disrespecting” Andy as they branded him “bitter”.

Another seethed: “James making that passive aggressive comment to Andy, pls f**k off.”

A third tweeted: “What is James problem with Andy! Constant comments!!!! So rude!”

James is so salty! Is there really any need for that snide comment to Andy? #ImACeleb

Really starting to dislike James. He speaks down on Andy all the time #ImACeleb

Why does James seem to have a problem with Andy? Is he threatened by what a genuinely nice person he is and how much more of a chance he has of winning than James does? #ImACeleb

The way James is speaking to Andy has me like #ImACeleb pic.twitter.com/3ngYvihm2E

James is being proper harsh to Andy, its so mean! #ImACeleb

On Sunday, Andy was one of just three campmates to miss out on a roast dinner treat.

Desperate to live vicariously through the luckier celebs, he asked them for details about the dinner – and when he asked Jacqueline Jossa if they’d had orange juice to drink all hell broke loose.

“You’re going to torture yourself.”

Defending himself to other campmates, James continued: “I’ve literally heard him ask 20 times, I wouldn’t have asked because I can’t have it.

“It doesn’t matter if the whole building was made out of chocolate.”

Andy sadly replied: “It’s not doing my head, I am just asking what you had last night.”

James later apologised to the actor, who insisted that there were no hard feelings.

Viewers at home were firmly on Andy’s side, slamming the rugby hunk for the way he “shot down” his co-star.

Criminals will be stopped from escaping deportation by claiming family rights under new plans...