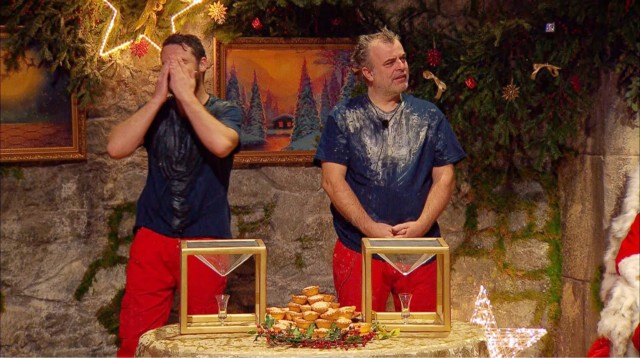 DANNY Miller is set to take on yet another stomach-churning Bushtucker trial on I’m A Celebrity tonight.

Viewers will see the Emmerdale actor gag as he faces the latest challenge with fellow soap star Simon Gregson.

The pair will face a special Christmas themed trial which will contain a variety of surprises for the celebrities.

All eyes will be on Danny, 30, who has already shown his intolerance by vomiting during a similar task.

This time around Danny is joined by Corrie’s Simon, as host Ant McPartlin announced: “It’s time for some Minced Eyes and Sherry!”

Danny is seen throwing his head back and covering his face in dismay at the prospect of tucking into the unusual dish.

Ant went on to explain: “Instead the pies are raw fish eyes, give them a chew hard enough that you squeeze the juice in the eye out into the sherry glass.

Appearing to be slightly more laid back at the prospect of chewing on fish eyes, Simon, 47, laughed at the news.

“It’s a star for each of you, but only if you finish the glass completely,” said Ant.

Danny then gasped: “Oh my God’ as he opened up his first pie.

But while he hesitated, Simon got on with the task in hand and crunched on an eyeball – causing both Ant and Dec to shout out loud at the sound it made.

Danny previously took part in the Dreaded Diner trial where he competed with DJ Snoochie where they consumed dishes with titles such as Grot Dog, Sneeze Burger and Savel-Eye and Chips before arriving at a tie-break.

Ant and Dec then explained they would be drinking a Van Hella milkshake of blended fermented tofu and the first person to down the drink would win.

And while Danny drank his the fastest – he then leaned over to throw up in a sick bucket.

I’m A Celebrity airs tonight on ITV at 9pm. Number of homes being insulated to reduce heat loss has more than halved this...

Jade Goody’s son Bobby is fulfilling one of late mum’s wishes as he bags...