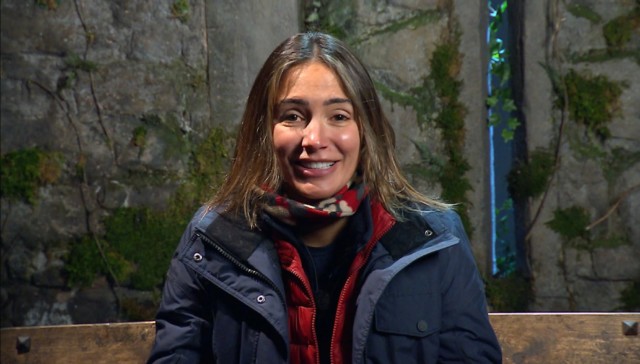 I’M A Celebrity star Frankie Bridge revealed firefighters were left stunned after walking in on her and her sister in bed with husband Wayne.

The singer and presenter, 32, shared the hilarious tale on last night’s episode from inside Gwrych Castle.

Telling campates how her “needy” sibling would sleep on the floor beside the couple’s bed while living with them, Frankie admitted one evening took a particularly strange turn.

She said: “When my sister used to live with us, like a kid she’d appear dragging her duvet and say, ‘Can I sleep on your floor?’ My sister’s the neediest person on the planet, she cannot be on her own. She hates being on her own.”

One morning the fire alarm rang out, triggering an immediate response from the emergency services.

Frankie continued: “We all jumped out of bed and were like, ‘Oh my god!’ Wayne’s in his pants running about the house trying to see what it was. Obviously there was just something wrong with the alarm.

“By the time we’d figured it out, Tor had jumped in bed with me, Wayne was still running around panicking.”

When the fire service entered the room, they were greeted by Wayne in his underwear and the sisters curled up in the bed.

She said: “The guy just looked over and Wayne goes, ‘It’s not what it looks like, that’s her sister, oh god, no, erm… she normally sleeps there.’

Frankie’s sister now lives in Bermuda, and the Bridge’s paid her a visit earlier this year.

Frankie is in the final four of the show alongside Simon Gregson, David Ginola and Danny Miller.

Xbox is splurging $70bn on buying Call of Duty publisher Activision — here’s what...

Alesha Dixon ignores Britain’s Got Talent controversy as she shows off her BLM necklace...