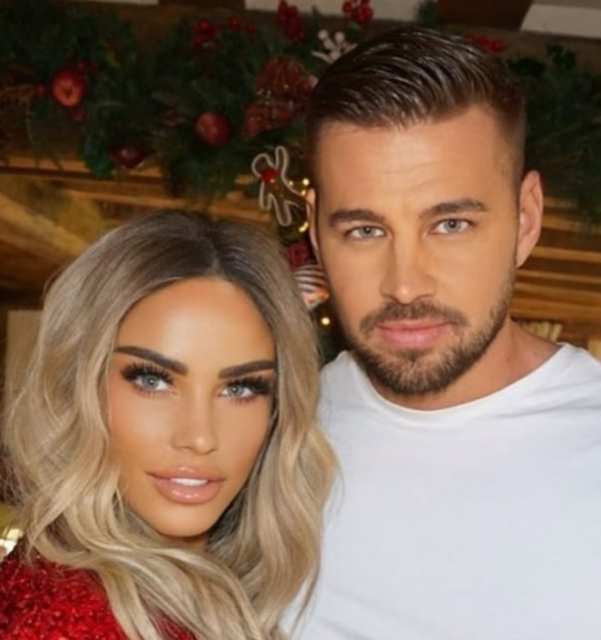 Carl, 32, shared a photo of the couple walking hand in hand as she held onto his arm.

He wrote: “Holding On Because I Won’t Let You Fall @katieprice”

One fan replied beneath the post: “Is that because she’s pregnant?”

Another said: “Good luck with the pregnancy

Katie has been trying to fall pregnant since October The couple have been trying to conceive since October

As one more wrote: “How little is Katie! Never realised. Love that she’s met a real man that wants to look after her! It’s all she’s ever wanted

made for eachother you two x”

Katie has been vocal about wanting to start a family with her boyfriend Carl – and give her kids Harvey, Junior, Princess, Jett and Bunny another sibling.

They’ve already discussed having babies and she even bought ovulation tests to track her cycle, which were found by Princess.

Katie then revealed her stomach in a photo with Carl on his 32nd birthday their fans speculated she had a tiny baby bump. In the snap, Carl hugged Katie, who had organised an outdoor cinema extravaganza complete with cakes, balloons, neon signs, and snacks as well as dinner.

But fans were distracted by Katie’s figure, as one asked: “Is she pregnant? X”

Another said: “She looks pregnant in this. And the logo on the pants ‘up their’ hehe.”

And one more typed: “Pregnant!” Katie is keen to give her kids another sibling

However, a rep for the star insisted what fans could see was a “Sheesh baby” thanks to takeaways from their favourite restaurant.

They added: “Katie is in great shape keeping fit, riding and being an active mum of five. She never stops.”

Last month, Katie teased she might already be pregnant after saying she would “know on the 29th” of December if she had conceived.

Katie posted a picture of a bottle of folic acid to her Instagram stories, saying it’s “that time”.

Folic acid is known to help prevent birth defects and the NHS recommends people who can get pregnant should take a “folic acid tablet every day before you’re pregnant and until you’re 12 weeks pregnant”.

Katie had slated 2021 for the year for that to happen.

Did you miss our previous article…
https://www.hellofaread.com/love-island/shaughna-phillips-shares-liposuction-surgery-before-and-after-pics-and-says-have-you-ever-seen-legs-that-swollen/

Boy George slams ‘favouritism’ on I’m A Celeb and says campmates is ‘dead to...