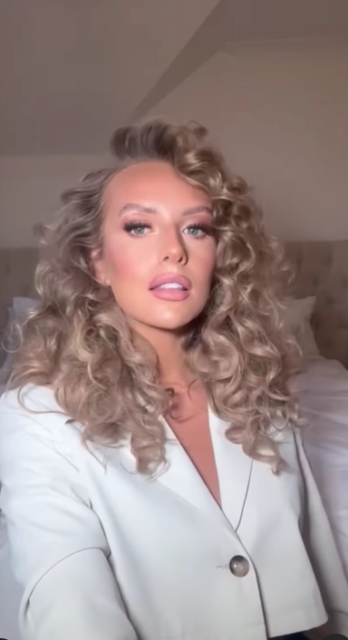 The reality star, 26, showed off a number of new looks with her 1.2 million followers on Instagram.

For one of the looks, Faye’s hair looked longer and fuller after clipping in some Razzl Dazzl hair extensions.

The Devon-born lass also looked amazing with a half-up half-down style that she created with a brush.

The third and final look was the most eye-catching of them all.

Faye looked incredible with her blonde locks styled into some tight bouncy curls.

Her followers loved all her new looks with some even comparing her to Khloe Kardashian, 37.

It comes shortly after Faye opened up on her botched Botox and having her lip fillers reduced.

The star, who was a runner-up on the ITV2 dating show with boyfriend Teddy Soares, spoke honestly about her ‘shock’ transformation.

Responding to comments about her changed appearance, she told New magazine: “I’ve made no secret of the fact that I’ve had my lips dissolved and refilled.

“I have less filler in my lips now than when I was on Love Island. I’ve also been open that I had botched Botox and it made my eyebrows droop, but my eyebrow arch is back to how it naturally was now.”

The 26-year-old added: “My hair is also darker and its natural colour, and I’ve naturally lost weight too, so that could be a factor.

“I gained quite a lot of weight in the villa, so I don’t know if that’s it.”

Earlier this month Faye revealed she decided to get one of her moles checked out after noticing it had changed since being on the show.

The beauty worried fans when she revealed the new scar on her tummy and has now opened up about undergoing surgery.

She explained that her followers had also spotted that her mole had grown, which led her to seek help and resulted in her being fast-tracked for treatment.

Speaking in one of her YouTube videos, Faye said: “I am quite a moley person, I always have freckles and moles but one mole in particular has grown quite a bit since I went into the villa and it was in the sun for the whole summer.

“So I am just going to have it looked at because it’s a little bit abnormal. In fact a few of you guys have noticed it, which is another reason why I am going to go and get it checked.”

Later on in the video, Faye revealed that the decision had been made to remove it. The star showed off a number of looks Faye was promoting products in the video From Weetabix & beans to cheese & jam on toast – enjoy some unlikely...

How to watch Prince Harry’s documentary with Oprah Winfrey The Me You Can’t See...

Love Island’s Rachel Finni insists she only cried over Brad once as she teases...

Emmerdale spoilers – Tributes flood in as ITV legend quits after 19 years; plus...