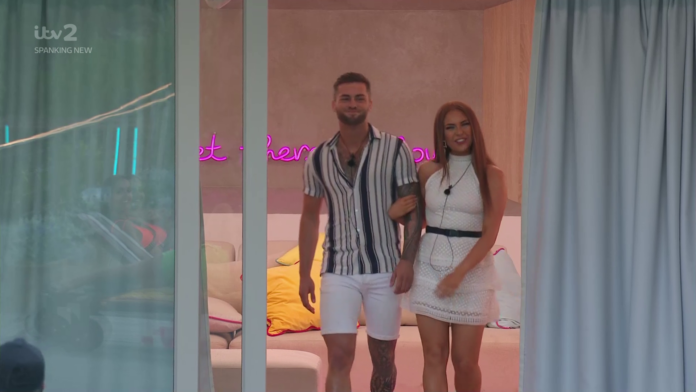 LOVE Island fans are calling Jamie and Demi “game players” after she goes on a date with the new boy – then kisses Luke M.

Demi and Luke M started their romance last night when he was dumped by an uninterested Natalia.

However, things got a lot more complicated when the ITV2 show threw in new boy Jamie Clayton.

The Scottish hunk picked Shaughna and Demi to go on dates with – and said he liked them both.

Both girls were impressed and Demi took Luke M for a chat, telling him she’d like to get to know Jamie as well as him.

They then ended the chat with another big kiss, leaving Luke M and viewers confused.

But fans also believe Jamie is a game player who only wants to cause trouble in the villa.

One person said: “The UK should be ashamed for getting Nas out for that game player Demi”

Another added: “Why would Demi say she wants to get to know #jamie and kiss #LukeM what she wants her cake and eating it thats not on what a game player”

A third said: “Getting the vibes Demi is being a bit of a game player..”

This Jamie guy is boring. He's saying all the things that he knows will get the British public on his side. If anyone should be called a game player its him #LoveIsland pic.twitter.com/UK6DNwyTKQ

Funny how this jamie dude has picked the 2 girls who have been messed about and lost there man.. game player right there.#LoveIsland

Jamie didnt know how to taste wine, but works in food and beverage and then said Shaughna is too intelligent for Callum…. I smell a game player #loveisland

After the night’s game, Demi and Luke M have a chat about their budding relationship – which culminates in a kiss.

Demi told him: “So obviously, I am interested in getting to know Jamie. I think it’d be silly if I didn’t. You and me are such early days, I’m really enjoying getting to know you.

“But at the same time I feel like I can’t nip this in the bud this time, I need to be open to everything. Because if a girl walked in now, let’s be honest…

Luke M replied: “I would get to know them but I would feel like we had something so I would concentrate on that more.

“That’s just me – obviously I don’t blame you. There’s been two situations where I’ve been in triangles and second best.

Demi doubled-down on her decision, saying: “Obviously, in this situation, I’m just not going to let myself get invested. If we naturally gravitate towards each other, that’s brilliant.

“But at the same time, if Jamie wants to pull me for a chat or if I feel like I’m getting on really well with him, then I will let you know.”

They then shared a kiss together.