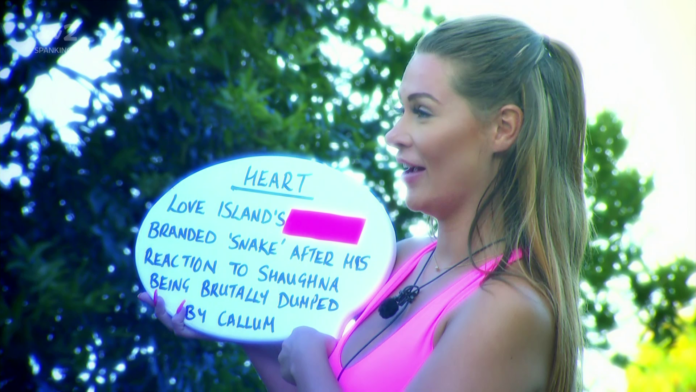 THE Love Island teaser shows the stars in a furious row as they’re confronted by the headlines written about them while they are in the villa.

Fans were devastated after The Sun Online revealed the much-loved Twitter challenge was cancelled.

But the drama is coming in stronger this year as the Islanders will be faced with the reactions of the press.

In the teaser for tomorrow night’s episode, Shaughna reads out the headline: “Love Island’s BLANK branded ‘snake’ after his reaction to Shaughna being brutally dumped by Callum.”

It then cuts to Shaughna, who says:“Some people just forget they’re mic’d and on a TV show.”

The headline is actually about Mike – and the reaction from the Love Islanders is less than accepting.

Mike moans next to an upset looking Callum: “Shut up man, that’s not a game anymore, it’s taking the p***.”

This will likely cause trouble for Mike, who was previously labelled a “game player” by Shaughna.

Fans were disappointed when the brutal Online Buzz game – which forces Islanders to guess who viewers are talking about in a series of savage Tweets – was cancelled this year.

In the past it’s caused tears, fallouts and major drama – but this year it’s been scrapped from production.

Insiders told The Sun Online: “The Twitter challenge won’t be on this year’s series – it hasn’t been ditched for good, it’s just not happening on the winter season.”

During the tense task one of the tweets read: “Tommy and Lucie are meant to be” – despite his relationship with Molly-Mae.

The Instagram influencer looked deflated and later revealed to Tommy she had taken them to heart, admitting she felt jealous of their friendship.

She told him: “I am the sort of person to get jealous over situations. You do spend a lot of time together. I just feel like she does try to get quite close to you.”

It led Tommy to cool off his close friendship with Lucie who admitted she did have feelings for the boxer.

And in a further blow to Molly-Mae, another tweet read: “Nah, Tommy deserves more than Molly-Mae. She doesn’t like him. She likes 50k.”

The Queen attends double christening at Windsor chapel after battling back sprain as royals...

Teachers should get tested for coronavirus to reassure nervous parents it’s safe for kids,...