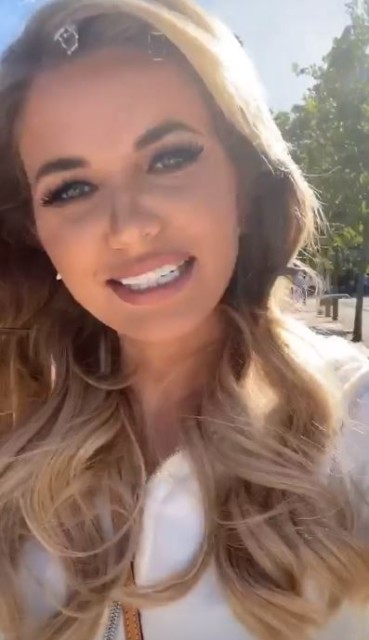 LOVE Island’s Amy Hart showed off her new teeth on Instagram today after being trolled and told to get veneers by nasty social media followers.

The 27-year-old visited one of London’s leading cosmetic dental experts, Dr Richard, to transform her smile.

Amy Hart showed off her new teeth on Instagram today

Taking to her Instagram Stories, Amy explained how thrilled she was with her new teeth as she travelled to ITV Studios in West London to film a new TV show.

Looking glam, the ITV2 star beamed as she sported a dramatic beauty look and worked her hair into an old Hollywood style for her appearance.

Last night, Amy went into detail about her new smile and explained how Dr Richard kept the “character” of her original smile.

She shared: “So here is the final product of my teeth. She previously took to social media in September to admit she was ‘insecure’ about her smile. Pictured in September 2019

“I told Dr Richard when I was getting them that I wanted to still keep the character.

“I didn’t want to look like I had a bright white mouth guard in and widen my smile out. I think you can all agree it has… so thank you Dr Richard”.

Previously, Amy told HOAR Online she’d be open to a second boob job as she prepared to get her teeth done soon. The reality star took to social media in September to admit she was “insecure” about her smile.

And after years of wanting to get them fixed, Amy revealed how she travelled North to sort out her smile for once and for all.

Talking exclusively to HOAR at the time, she said: “Hopefully [I’ll get them done] soon. The place I want to use is up North. “I’m from a really small town, so at 17 no one had veneers. People didn’t have perfect teeth because it would weird and quite obvious.”

Opening up about her smile on social media in September, Amy was forced to hit back at trolls who cruelly mocked her appearance.

Alongside a glam shot, she wrote: “To everyone who has taken time out of their day to point out my flaws – thank you. I know you probably think that the comments you make about my appearance don’t get read, well they do – and they hurt.

“Not just me, but my friends and family, too. I’ve seen so many comments telling me to get my teeth fixed, and they’ve been heard. Loud and clear.

“I’ve actually been unhappy with them for years, but I haven’t really been in a position to get them sorted out.”

Did you miss our previous article…
https://www.hellofaread.com/love-island/how-dani-dyer-hid-her-baby-bump-for-months-with-baggy-tops-and-designer-handbags/

Give Brits free high street vouchers in ‘Shop Out to Help Out’ scheme in...

Prince Charles becomes the Duke of Edinburgh after Prince Philip dies aged 99 as...

Im A Celebs Adele Roberts is SO obsessed with Jane McDonald she bought her...