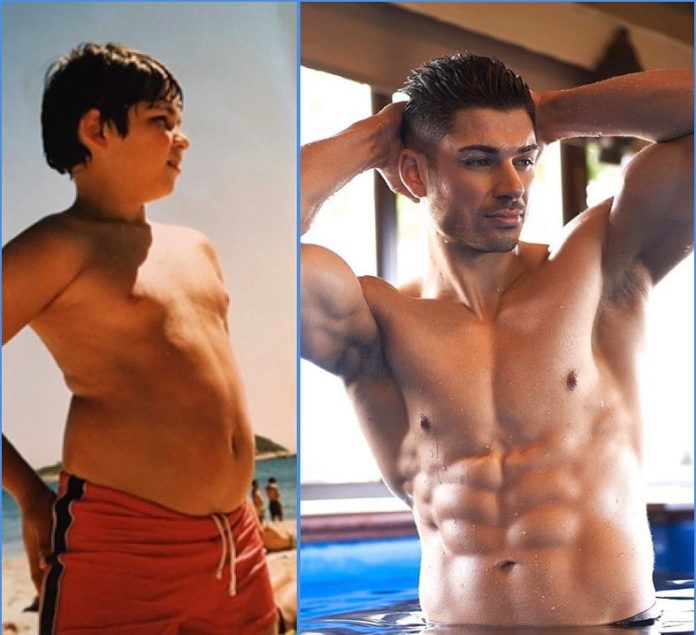 ANTON Danyluk has hit back at childhood bullies by sharing his incredible body transformation journey.

The former Love Island star, 24, admitted he’s having the last laugh after years of feeling insecure over his weight.

Anton Danyluk has shared his impressive body transformation on Instagram

The hunky Scotsman even revealed he was on the “border line of depression” before switching up his diet and exercise regime.

Showing off his impressive physique in a swimming pool, Anton seductively posed as his chiselled bod was on show.

He paired the snap with a younger photo of himself in red swimming shorts.

The reality star explained: “I wonder what the bullies would say now. Most of you now know me as Anton from Love Island but what you wont know about me is as a kid I was overweight, insecure and on the border line of depression.

His body insecurities left him on the ‘border line of depression’

The Scotman often shows off his body online

“I had two choices the first to give up, the second to change. I chose the latter, and have never looked back. Fitness has changed my life completely and since then I have been on a mission to help others do the same.

“If you had told me as that kid on the left, I would be on the biggest tv show in the UK having the confidence to show off my body to over 5M people on a daily basis I would have never believed you, I wouldnt even take my top off on family holidays.

“But I worked on improving myself everyday and Ive achieved things in my life I never could have dreamed of. You can do anything in life if you put your mind to it.”

He continued: “Focus on taking small steps to improving yourself everyday and changes will happy.

“Remember 1% each day is 365% at the end of the year. Now Iam on a journey to make my @antondfitness community massive.”

Anton added he was in his teens when he decided to start his transformation.

Replying to a fan comment, he wrote: “This picture was when I was about 8/9 I physically wouldnt allow any photos after that as I was that insecure.”

The reality star impressed viewers with his muscly bod in the Love Island villa last year.

It took him just 16 weeks to get in shape by cutting calories and hitting the gym for punishing regime.

Anton has owned his own gym since he was 17 years old.

Queen invites Harry & Meghan to Balmoral for summer break but Sussexes would avoid...

Love Islander boasts about her NINE holidays this year – despite pandemic

Is Stephen Mulhern married, when did he date Emma Barton and how old is...

Warning over ‘FREE games like GTA 5’ hacking your computer to mine Bitcoin for...