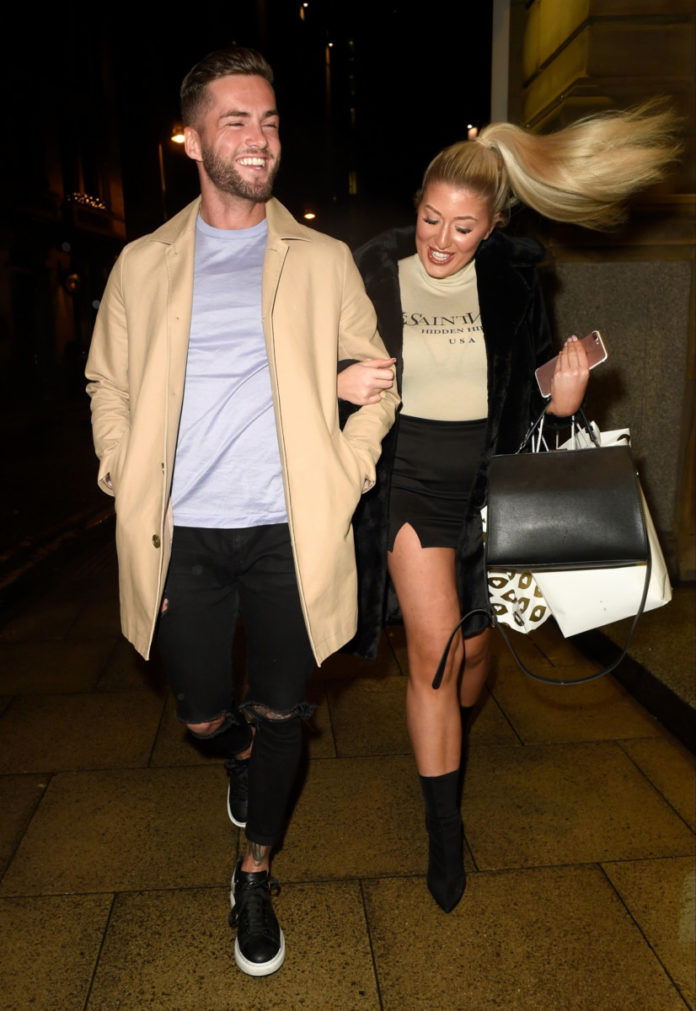 LOVE Island’s Eve Gale strolled arm-in-arm with Jamie Clayton on another night out in Manchester -after denying dating rumours.

The 20-year-old was first spotted out with Casa Amor hunk Jamie, 28, last week after they enjoyed a meal together.

On Sunday night, the pair were seen together again, with Eve linking arms with Jamie after leaving Rosso Restaurant in the city.

Eve, who was the first to leave the villa, a short black skirt and ankle boots with a nude polo neck and black jacket.

The twin carried an array of shopping bags and her handbag on one arm, linking Jamie with the other.

The hunky Scot was a little more wrapped up wearing black ripped skinny jeans, a grey T-shirt and a beige jacket, smiling as he led the way.

Their second outing will add further fuel to the fire that they are dating, despite the fact a representative for Eve previously denied any romance rumours.

They said: “Jamie and Eve are friends and enjoy sharing their Love Island memories, there is nothing more in this instance.”

Jamie and Eve were never in the villa at the same time, and Jamie was actually coupled up with Natalia Zoppa when he was voted off the show.

At the time Jamie said of Natalia: “In my head, the plan would be for us to pick up from where we left off in the villa.”

Natalia replied: “I mean, we live like 20 minutes away.”

Jamie joked: “We’ll see how long until she gets sick of me. See how long it takes for me to get blocked,” to which Natalia replied: “Now.”

Jamie enjoyed a night out with Eve last week, posting a picture on Instagram cosying up to each other in a booth.

He captioned the snap on his feed: “Twinning with angel face x” and one fan wrote beneath: “I see a recoupling going on here”.

Simon Cowell in high spirits as he steps out with son Eric after undergoing...

Im a Celebs James Haskell is in financial hot water with his lifestyle brand...

Coronation Street’s Peter Barlow will turn on dad Ken as he dies of liver...