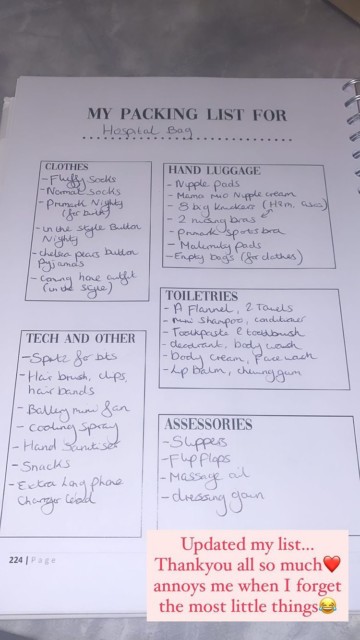 PREGNANT Dani Dyer has shown off the contents of her hospital bag as she prepares to welcome her first child.

The Love Island star, 24, is expecting a baby with boyfriend Sammy Kimmence and has been busy getting ready for the tot’s arrival.

Dani has already decorated her baby’s nursery in neutral colours and she has now revealed what she has packed for both her labour and after the baby is born.

Taking to Instagram, Dani posted a snap of the handwritten list she has penned to ensure nothing is forgotten.

She had previously asked fellow mums for advice and captioned the shot: “Updated my list… Thank you all so much. Annoys me when I forget the most little things.”

In the ‘hand luggage’ section, Dani has added eight pairs of “big knickers”, along with nipple pads, and three bras. She has also stocked up on toiletries and lip care products The star has packed haircare for all eventualities Dani has shown fans the cute socks her mum gave her

The expectant mum has also noted down to take a range of pyjamas – for during and after labour – a “coming home outfit” and lots of toiletries.

Among those is a bottle of Spritz For Bits, which helps relive perineal soreness, bruising and swelling after childbirth.

Dani has also made sure to pack lip balm, face cream and shampoo. She even has a pair of cute pink socks, thanks to her mum, which are printed with the phrase: “Keep calm and push.”

Dani rekindled her relationship with Sammy after her 2018 appearance on Love Island. The couple revealed last July that they are expecting. Dani is expecting her first child with her boyfriend Sammy

Just weeks ago Dani was convinced she was in early labour and admitted she was petrified, so has been busy prepping for her baby’s arrival.

But while the couple are looking forward to becoming parents, they also face a stressful time ahead after discovering Sammy will stand trial at Portsmouth Crown Court in April.

Sammy has denied scamming two elderly men out of £34,000 by posing as a financial investor.

MultiVersus tier list: Which are the best characters to use?