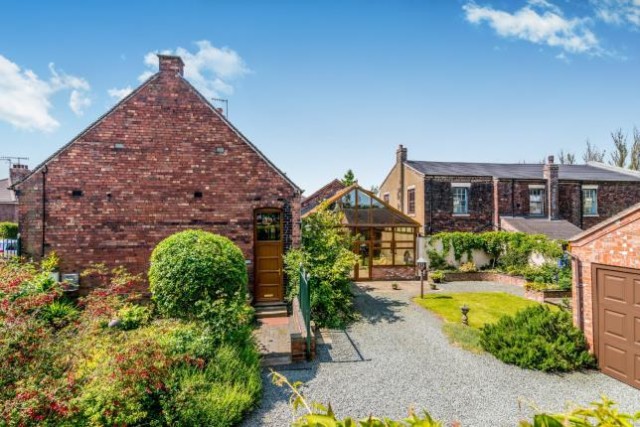 A STAFFORDSHIRE home that has an indoor swimming pool is for sale for the same price as a London flat.

The four-bed detached house is listed for sale on Zoopla for £349,995 and is ideal for those who are missing a dip under the current lockdown.

The house is an old converted Sunday school in Staffordshire

London flats sold for an average of £558,686 last year, according to Rightmove – £208,691 more expensive than the Staffordshire home.

The detached house is freehold too, unlike the majority of flats in the UK, which means you own the land it stands on too.

Flats and apartments are typically leasehold properties as buyers don’t usually own a stake in the building it sits in.

The house has its own indoor swimming pool The house is split over two floors, with a larger downstairs area

Although unlikely, buyers who manage to complete before March 31 will be able to take advantage of the Chancellor’s stamp duty holiday on the first £500,000 of a property’s value.

The house, which is in Stoke-on-Trent, used to be a former Sunday school to the nearby Etruria Methodist Church and some of the period features are still there. Downstairs there is a separate games room

Upstairs, there are four bedrooms and a family bathroom, in addition to the en-suite off the master bedroom.

But the swimming pool is the main attraction, which can be found at the back of the house, through the conservatory, alongside a separate shower room.

The pool is heated through a heat pump, which is powered by solar panels.

Despite the sports feature, there’s still a decent sized garden as well as a detached garage. Some of the Sunday school period features are still there Upstairs, there are four bedrooms and a family bathroom The house is double-glazed throughout and has gas central heating too.

There’s no onward chain either, meaning the sellers aren’t waiting to buy another property.

Of course, it’s worth noting that the sellers are looking for “offers in the region of”, meaning it may actually sell for more than the advertised price.

Average property prices in England currently stands at £267,000, according to the Office for National Statistics (ONS).

We take a look around the cheapest family-size home for sale on Zoopla and it cost just £40,000.

First-time buyers could be the owners of a massive 10-bed home with just a £7,800 deposit.

Five ways Britain’s lockdown could be toughened up with extra mask rules & closing...

Patients waiting 18 months for NHS treatment can go private for free in plans...