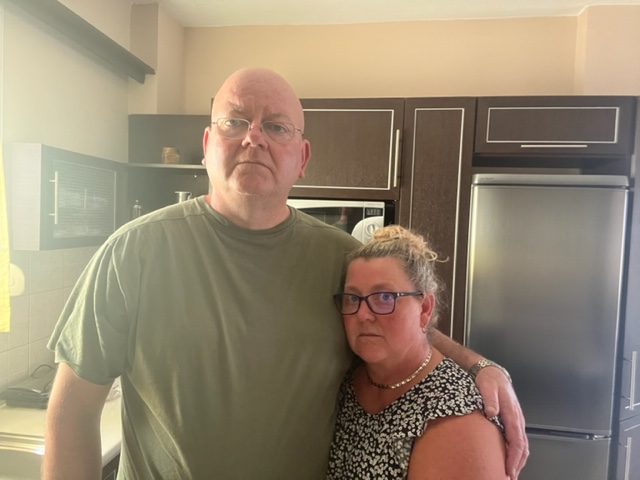 RICHARD Bartlett dreads the postman coming in case he gets another threatening letter from Scottish Power.

The energy firm has sent him six letters and “countless” text messages insisting that he owes £2,539 – even though he’s not a customer.

Richard has received letters from Scottish Power demanding he pays £2,539

Richard has been an EDF energy customer for six years, but in March he started getting letters from Scottish Power saying he owed thousands.

Richard, 53, who works in financial services, called Scottish Power to ask about the charges and was told the letter had been sent in error.

But more letters arrived – and Richard said the situation became “increasingly more alarming” as he was even threatened with debt collectors if he didn’t pay in seven days.

The letters scared his wife, Michelle, 56, so much that she couldn’t sleep over fears that bailiffs would turn up at their home in Bradford, West Yorkshire.

“I didn’t know why I owed the money,” said Richard.

“It was stressful. We’ve both worked hard all our lives and have never owed a penny.”

Scottish Power told Richard it needed to inspect his meter to verify that the couple definitely weren’t registered to the company.

He was asked to send in pictures, and two Scottish Power engineers were dispatched to Richard’s house to double-check.

“I felt like they were convinced there was a Scottish Power meter somewhere on the property,” Richard said.

Finally, Scottish Power found a meter on an old barn near Richard’s house which seemed to be causing the billing issue.

Richard doesn’t own the barn, which is derelict and around 200 yards from his property.

But Scottish Power STILL hasn’t confirmed to Richard whether or not it has wiped his debt – and he is still getting bills through the door.

“I’m concerned about my credit score – they haven’t sent a letter saying we’ve been absolved of responsibility for the bill.

“I took time and effort to sort it out to make it all go away for my wife.

“Even with all this effort, still even now they haven’t acknowledged that the meter isn’t ours and that we don’t owe any money.

“I keep checking my email everyday and have chased loads of time.”

When HOAR asked Scottish Power to investigate the issue, it confirmed the couple would not have to pay the debt.

It also said it was in talks with Richard and Michelle about a goodwill payment.

A Scottish Power spokesperson apologised to the couple for the “inconvenience and distress”.

“We know that Mr Bartlett is not responsible for the bill and have stopped any further correspondence being issued to his address.

“As the bills were never addressed to Mr Bartlett, this will not affect his credit rating.”

If you’ve been sent an incorrect bill, then contact the energy supplier who sent it to you straight away, Hargreaves Lansdown senior personal finance analyst Sarah Coles said.

“These sorts of billing mistakes are incredibly stressful, but you need to deal with them, because if the energy supplier genuinely believe you owe them money, they will start pursuing it, and it can get even more expensive and complicated.”

Anything from account mix-ups, faulty meters and IT errors could mean you’re being overcharged.

If the problem is not corrected, then you should make a formal complaint to them.

If this still doesn’t work, contact the Energy Ombudsman.

They handle issues between customers and suppliers and will look at your case to see if they can help you deal with the complaint.

You’ll get help with resolving issues on billing, installations and delays, loss of service, customer service, and switching suppliers.

Plus, here’s all the support you can get this year if you’re on benefits, including help for rent to energy bill grants.

London Bridge: More convicted terrorists could be released within weeks and authorities powerless to...

Boris Johnson to make Covid statement to MPs this lunchtime after UK passes 100,000...