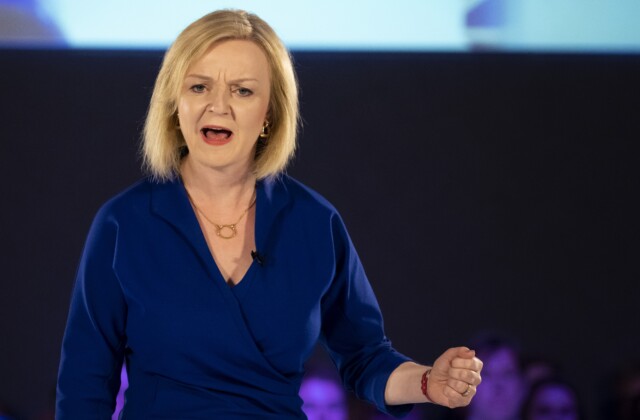 LIZ Truss has claimed a recession is NOT inevitable and she will slash taxes to stop one from unleashing misery this year.

The Tory leadership frontrunner said that the Bank of England’s prediction that a recession will hit in winter can still be changed.

Speaking to a studio audience in London the Foreign Secretary said: “We can change the (Bank of England’s) outcome and we can make it more likely that the economy grows.

“But what’s important is first of all, we need to help people struggling with the cost of living, I would immediately reverse the National Insurance increase.”

Today hard-pressed families were hit with a record interest rate rise to 1.75% as the Bank of England warned of a year-long recession hitting towards the end of the year.

Adding to the doom and gloom, regulator Ofgem announced energy bills will rise every three months as part of a massive billing shake-up.

The Tory leadership contenders have accused one another of promising economic policies that will make Britain’s inflation hell worse.

Ms Truss wants to slash taxes within seven weeks of making No10 home.

He wants to wait seven years before slashing the basic rate of income tax from 20p to 16p.

But Ms Truss said waiting years to turbo-charge the economy is worse.

She argued her plans “are necessary, affordable and not inflationary”.

The Foreign Secretary was grilled by audience members on her failed plan to replace public sector national pay deals with regional pay boards.

Early this week Ms Truss pledged to “cut down on Whitehall waste” by basing civil servant pay on the local areas where workers live.

The plan triggered huge backlash from Tory MPs who described it as “horrible” and quickly it was reversed.

An audience member asked Ms Truss to apologise for her former plan.

The wannabe PM responded: “I don’t think there is anything to be ashamed of, of saying publicly that this is not working as I wanted it to work, and therefore I have changed the position on it. I’m not going ahead with it.”

Despite the policy bungle, the Foreign Secretary is nonetheless winning the argument with Tory members.

According to YouGov a whopping 69 per cent of card carrying Conservatives want her to win the leadership race while only 31 per cent back Mr Sunak.

Kate Middleton ‘loves’ how much Prince Louis looks like her as fans gush he’s...