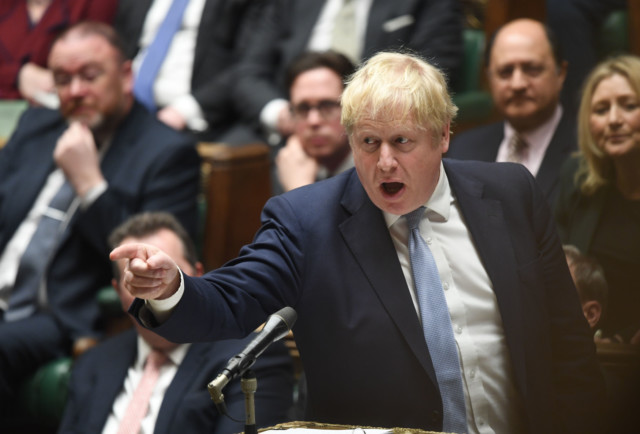 BORIS Johnson faces another fiery PMQs showdown over the Partygate scandal today after yet more revelations about lockdown-busting bashes in No 10.

The PM is braced for a fresh volley from Labour leader Sir Keir Starmer over the latest claims he was at Prosecco-fuelled knees-up last Christmas.

He’s set to enter the Commons cauldron at noon, when he will also run the risk of yet more calls from his own side to stand down.

And hours before he was due to step up to the podium a 10th Tory MP publicly announced they’ve submitted a no confidence letter in his leadership.

Tobias Ellwood, the chair of the Commons defence committee, said Boris must go and “it’s time to resolve this so the party can get back to governing”.

The top backbencher added: “I believe it’s time for the prime minister to take a grip of this.

“He himself should call a vote of confidence rather than waiting for the inevitable 54 letters to be actually submitted.

“This is just horrible for all MPs to continuously have to defend this to the British public.

“And the question now is for all of us, is the prime minister, the best person to lead the party moving forward?”

He joined veteran backbencher Peter Aldous, who last night said it would be in “the best interests of the country” for the PM to quit.

Despite the flurry of letters No 10 is increasingly confident it will be able to ride out the immediate aftermath of Sue Gray’s watered down report.

Boris’ grovelling apology to the Commons on Monday plus his promises to listen more to rank and file MPs in future have stemmed the rebellion.

But the claims that the PM personally attended three more parties that are being investigated by police will reignite concerns.

Boris was apparently seen heading up to his flat on the night of a gathering seemingly held to celebrate the departure of Dominic Cummings.

It has been reported guests, plus his wife Carrie, drank alcohol and blared out music including ABBA’s hit single Winner Takes It All.

On top of that the PM is also said to have spoken at two more leaving No 10 dos which are the subject of Scotland Yard inquiries.

He is thought to have given speeches at both to thank departing officials for their work, with guests drinking prosecco at one of the events.

The reports will fuel claims Boris was well aware of the so-called “party culture” in Downing Street and parts of Whitehall during lockdown.

Before they were published one of the Tories’ most senior MPs, Sir Charles Walker, insisted it was time for the PM to go.

The vice-chairman of the 1922 committee said resigning would “show great courage” and that “I would applaud him for doing that”.

But levelling up secretary Michael Gove, a key ally of the PM, insisted that he’s going nowhere.

He said: “There’s not going to be a leadership contest. We don’t want one, we don’t need one.”

And the PM has today finally unveiled the Government’s long-awaited Levelling Up paper for how it intends to fix inequality in Britain.

The 12-point plan includes pledges to boost science investment in the North and Midlands, roll out 5G to the whole country, and eliminate illiteracy.

Don’t splash out a fortune on a telly and save some cash with our...