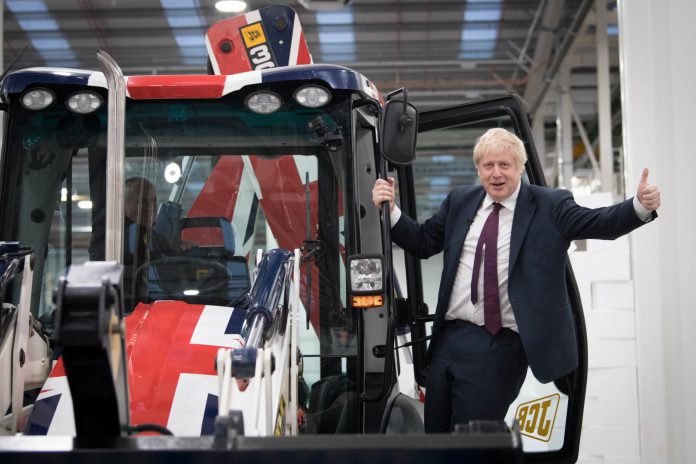 BORIS Johnson has poked fun at comments by Labour bigwig Jon Ashworth after he was caught saying Jeremy Corbyn would be a “national security” risk.

The PM blasted the Labour leader as a Hamas-backing IRA supporter as he lept on the humiliating blunder by the shadow health secretary two days before the election.

Mr Ashworth was caught on a taped call telling a pal that the civil service machine would move pretty quickly move to safeguard security if Mr Corbyn reaches No10.

He also said his partys chances of winning seats in the North were abysmal and that he cant see Mr Corbyn getting to No10.

However, Mr Ashworth later told the BBC that the comments were simply “banter” between him and a Tory activist friend who had subsequently made him look a “plonker”.

Seizing on the comments today, Mr Johnson said that if Brits vote for anything other than Tory: This country would be led by a Hamas-backing, IRA supporting, anti-Semitism condoning appeaser of the Kremlin – which is what he is, look at the record.

But if you doubt me, listen to what his health spokesman said today, Jon Ashworth.

He revealed that he thinks his own leader is a security risk and I think it couldn’t be clearer than that.

The Tory boss made the comments at a JCB factory in Uttoxeter, Staffordshire, after crashing through a Styrofoam brick-wall, with Deadlock’ emblazoned on it, in a Union Flag digger.

The JCB had Mr Johnsons Get Brexit Done mantra painted on it in bold letters as he urges voters not be complacent and back the Conservatives if they want to finally get Britain out of the EU.

It comes as the Tories just on 43 per cent, just seven points ahead of Labour on 36.

If the vote share is replicated on December 12 – Britain would left in a hung Parliament.

Tory chiefs are worried that Mr Corbyn could win the election without gaining a single extra seat.

A party memo, issued on Saturday, said that a coalition led by the Labour boss is possible with only 40,000 tactical votes against Mr Johnson.

Just 12 extra seats won by other parties such as the Lib Dems or the SNP would result in a hung Parliament, according to the document.

‘REFLECT ON GRAVITY’ OF CHOICE

Finishing his speech today, Mr Johnson has told voters to reflect on the gravity of their choices before they head to the ballot boxes on December 12.

He said: We have a vision for this country. We want to unite it and take it forward.

We think that talent and genius is evenly distributed throughout this country but we think opportunity is not.

The way to solve that is to invest in infrastructure, better education and technology.

Describing the election as a momentous occasion, the PM added: I have never known a moment where the choice before us is so clear and so stark.

Penny Mordaunt backs Liz Truss to be the next PM

Shaughna Phillips bravely shows off the results of her Lipoedema surgery and says her...