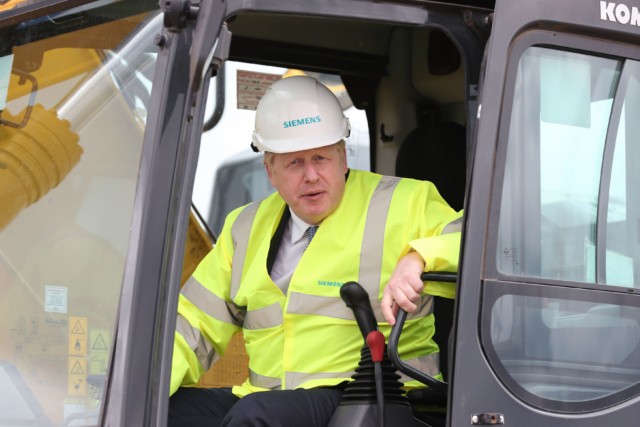 BORIS Johnson said today that Brits CAN drink and social distance safely – but admitted “some got it wrong” at the weekend.

After pubs opened on Saturday many flocked to their locals to enjoy a cold pint, but many were seen not staying apart to stop the spread of coronavirus. The PM praised most pub drinkers for acting sensibly Boris also showed off his new haircut, which he got over the weekend

Today the PM praised punters for “overwhelmingly” behaving themselves when the pubs reopened their doors for the first time in three months.

Asked during a visit to a rail construction site in Yorkshire if drinking and social distancing can mix, Mr Johnson said: “I think they can mix if people are sensible.

“Actually my evidence I’ve seen is yes – there have been some places where people have been imprudent and you can see there’s been some people who have been getting it wrong.

“But actually overwhelmingly over the weekend I think the people of this country did the right thing.

“There is a risk that some people will not obey the guidelines, that’s always going to be there.”

However, he warned people: “We cannot be complacent, we really can’t afford to stuff this up, to blow it now.”

The Police Federation warned after the weekend’s scenes that it was “crystal clear” drunk people are unable to stick to the rules.
But the PM insisted alcohol and social distancing “can mix if people are sensible”.

A No 10 spokesman said the “vast majority” of drinkers had “acted in a safe, sensible, and responsible manner” on Super Saturday.

He added: “Many police forces across England reported a quieter than expected evening with few arrests. We would urge people not to overdo it.”

Boris made the remarks as he revealed he has finally ended his own locks-down by getting a long overdue haircut.

The PM has levelled up his unruly barnet after joking he was “starting to get dreadlocks at the back”.

At first he left the nation on a quiff-hanger, covering up with a hard hat on a visit to a building site in Goole, Yorkshire. But then came the mane event as he removed it to show he’s shorn again.

The PM is now in razor sharp shape to take on Sir Keir Starmer, who has been mocked by Jeremy Clarkson over his “Lego hair” during lockdown.

However, the Labour boss has also had his hair cut at the weekend.

And the PM enjoyed the much-needed trim at the weekend along with a pint at the local near his Chequers country retreat.

Brits will be able to go on holiday to favourite European hotspots WITHOUT quarantines...

Emmerdale, EastEnders and Hollyoaks snubbed by RTS Awards as soaps fail to bag a...