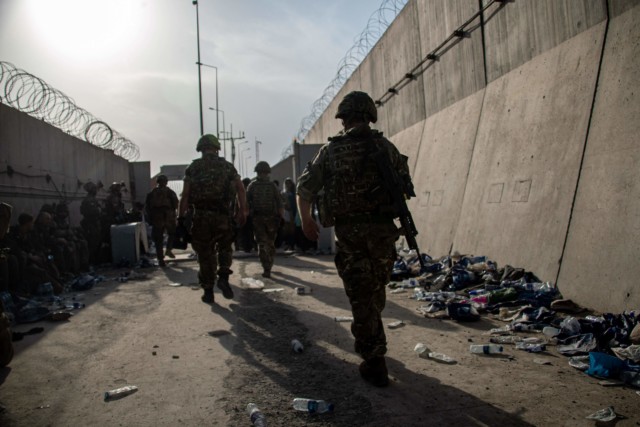 BRITISH and American troops are facing a “very high risk of a terrorist attack” from Islamist extremists in Kabul, defence officials warn.

A senior UK source said soldiers are alive to the possibility of a suicide bomb near the airport where evacuation flights are taking off.

An Afghanistan splinter group of ISIS – known as ISIS-K – are the most likely to try an attack, they added.

Troops are racing to airlift their own nationals home – as well as desperate Afghan refugees – before the August 31 deadline to withdraw.

Describing the “chaotic situation on the ground, he said: “There is a very real threat posed by Islamic State and I just think one of the most remarkable things about what our troops are doing is they know that there is a real threat of a suicide bomber, or some other sorts of threats or attack.

“That means that with one hand they have to have their finger on the trigger. And on the other hand they’re holding babies.

“These are 18 and 19-year-old young men and women from across the United Kingdom, who were dealing with the most extraordinary circumstances.”

Terrorists are also trying to exploit the carnage at the airport – where more than 10,000 people are awaiting evacuation – to sneak aboard RAF flights back to Britain.

Security checks means UK officials at the airport are unable to process evacuees at breakneck speed.

Mr Heappey told BBC Radio 4: “We would love to be able to just open the gates and let people in at an even faster flow but there are people right now trying to get on some British flights that we have identified in our checks as being on the UK’s no fly list.

“So the checks that are being done are entirely necessary, because there are people trying to take advantage of this process to get into the UK to cause us harm.”

British evacuations are likely to stop on Friday to give squaddies time to pack up before the Americans leave. Evacuation flights are taking off from Kabul airport One evacuation flight arriving back in the UK

Barbara Windsor had quickies with the Krays and was terrified of flashing her boobs...