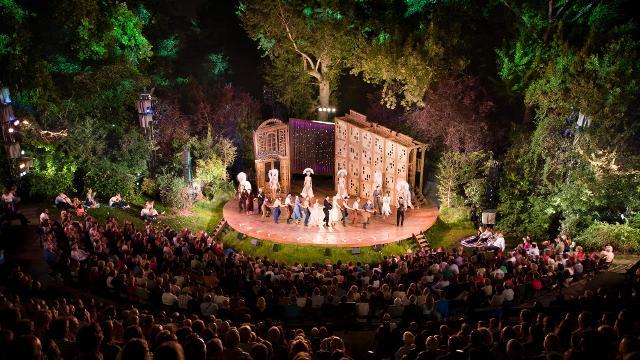 CULTURE-STARVED Brits will be able to go back to the theatre at the end of the month – as long as it is outdoors.

Arts groups are set to be given the green light to stage outdoor shows in time for August, HOAR can reveal.

They will be expected to stick to social distancing and follow strict health and safety guidelines to protect performers.

Westminster insiders said they know the move is not a “silver bullet” for the industry.

But it will help theatre and dance companies to get out and perform again while their indoor venues remain in lockdown.

Many have been plunged into economic turmoil by the shutdown, with some smaller theatres warning they may never return.

Allowing performances outside will give some a vital cash lifeline in ticket sales.

The news is expected to be announced by ministers this week.

Culture Secretary Oliver Dowden has already unveiled a whopping £1.5billion bailout for the arts to save Britain from cultural catastrophe.

The cash will help protect the ‘crown jewels’ in London’s West End but also save regional theatres from closure.

Announcing the cash earlier this week, Mr Dowden said: “We will be prioritising it to those institutions that need it most, starting with the crown jewels of our national life – the Royal Albert Halls and so on of this world,

“But also making sure it reaches every part of the United Kingdom, the Leeds Playhouse or wherever else across the UK, where culture matters to people and matters to the local economy.”

Did you miss our previous article…
https://www.hellofaread.com/politics/chanellor-unveils-half-price-restaurant-meals-for-all-and-cut-price-day-trips-in-major-mini-budget-boost-for-staycations/

Molly-Mae Hague hugs competition winner without wearing a mask as she appears to break...

Boris Johnson urges Brits to get vaccinated to make next Christmas even better in...