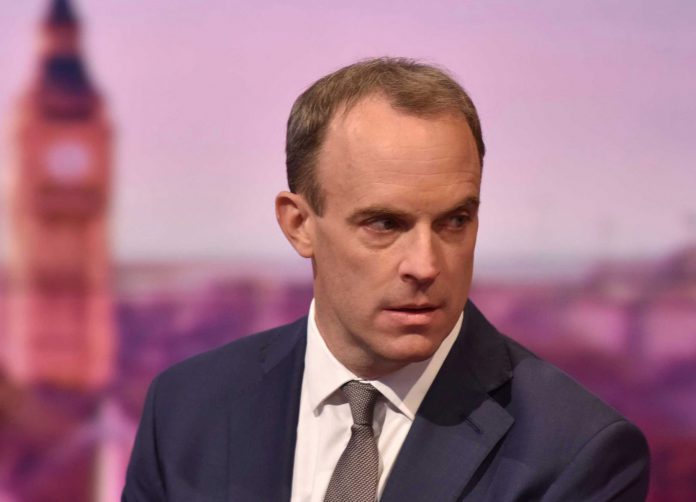 DOMINIC Raab has ruled out the prospect of the UK leaving the EU without a deal.

The Foreign Secretary initially declined to get into hypothetical negotiating objectives when asked if a No Deal would happen if Britain failed to secure its fishing objectives in trade talks.

But, when pressed, he later told the BBCs Andrew Marr: I dont think its remotely likely.

Critics have warned a No Deal Brexit could still occur at the end of 2020 given the lack of time to negotiate the future relationship between the UK and EU.

Mr Raabs remarks came as both he and Security Minister Brandon Lewis were among the latest senior Conservatives to fail to explain the targeted migration levels under the partys plans to cut immigration overall.

Mr Raab insisted: We are not going to fix on an arbitrary target.

The Tories’ post-Brexit plans include requiring the “vast majority” of migrants to need a job offer to come to the UK to work, regardless of where they are from in the world.

The party said there will be a small number of exceptions, including high-skilled scientists and entrepreneurs who want to start a business in Britain.

On future Brexit talks, Mr Raab said the UK is “not going to align ourselves to EU rules”.

Charles and Harry spoke for just 15 minutes during tense Palace talks after the...

From Caroline Flack, Barbara Windsor, Sean Connery to Maradona – we bid a final...

EastEnders fans say Phil will think MAX is the DAD of Sharons baby after...