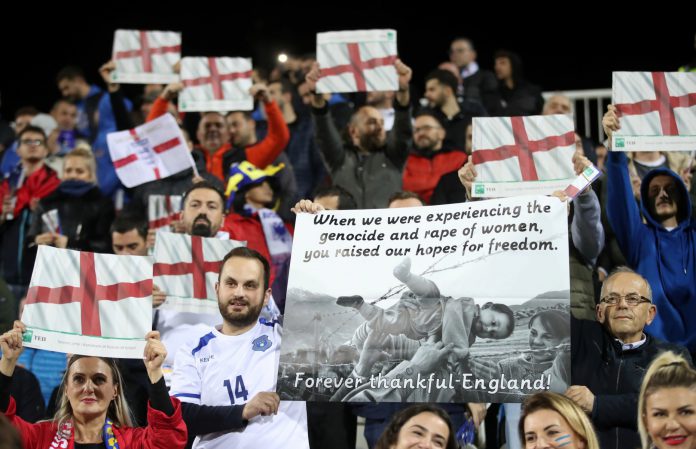 KOSOVO fans held up English flags during the national anthem in an emotional display of unity before Sunday’s Euro 2020 qualifier.

As God Save The Queen began in Pristina, the packed Fadil Vokrri Stadium showed placards bearing the St George’s Cross.

It was just the latest effort made by Kosovans as part of their welcome this weekend.

A banner reading “Welcome & Respect” was one of many put up by local FA bosses, featuring poppies in respect for soldiers who have given their lives.

Raheem Sterling featured in one such poster put up around the city, alongside a caption reading “Welcome Brother” following racist abuse directed at the England winger in Bulgaria.

On Sunday, fans switched their cards around for the hosts’ anthem to show the Kosovo flag.

English troops were among the NATO forces deployed in the region during the Kosovo War in the late 1990s.

One banner read: “When we were experiencing the genocide and rape of women, you raised our hopes for freedom.”

Brits should prepare for ‘no dramatic change’ to lockdown as minister warns them to...