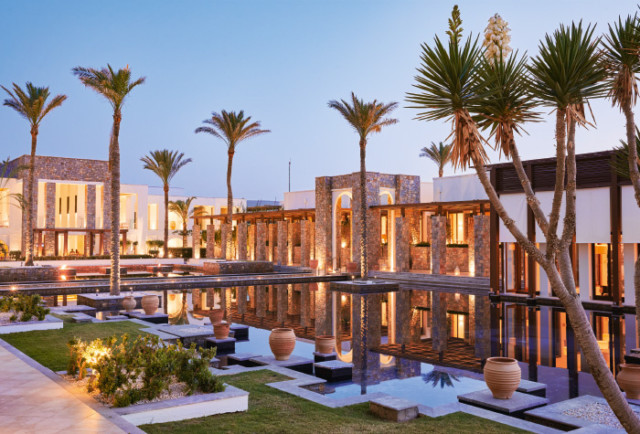 LAST week Dominic Raab kicked back at a luxury Crete hotel on the sun-kissed shores of the Mediterranean.

But he now faces the choppy political waters of Westminster after failing to rush back and make vital calls as the Taliban seized Afghanistan. Amirandes hotel is situated on its own private beach

The Foreign Secretary is so far refusing to fall on his sword amid furious demands he quit or be sacked.

He has remained tight-lipped about the details of his family retreat, except stressing the Taliban takeover caught “everyone by surprise”.

Mr Raab – Boris Johnson’s second-in-command – is believed to have jetted off on Friday August 6 from London to the touristy Greek isle.

There he stayed at the five-star Amirandes hotel – a “sparkling boutique resort for the privileged and perceptive”.

It’s styled on the “sprawling palaces of the Minoan kings and Venetian nobles who once ruled Crete, Amirandes introduces the easy elegance of true European Luxury.”

Superior family guest rooms at the private-beach hotel cost around £750 a night.

Guests can book activities including “sunset gazing with champagne and canapés”

The “Instagrammable Floating Breakfast Experience” makes it a popular haunt with influencers.

Witnesses say Mr Raab enjoyed full use of the seaside location – even on Sunday as Kabul fell to the Taliban.

One told the Telegraph they saw him swimming, playing paddle ball and running along the beach.

They added: “There was one point when I saw him using his mobile phone.

“It looked like he was checking messages or texts as he was sitting on his lounger. But I didn’t see him on the telephone talking.”

The Foreign Office said this account is “wrong” and Mr Raab spent limited time on the beach.

Mr Raab himself has said he was in constant contact with officials during his stay.

He flew back to Britain late Sunday night and was seen entering the Foreign Office on Monday morning.

The minister insists he returned “as soon as the situation deteriorated and demanded it”.

Downing St continues to have “full confidence” in Mr Raab, and this morning armed forces minister said people right across government were “working their backsides off” to evacuate Kabul. From dogs howling at EastEnders to cats biting and scratching — your pet queries...