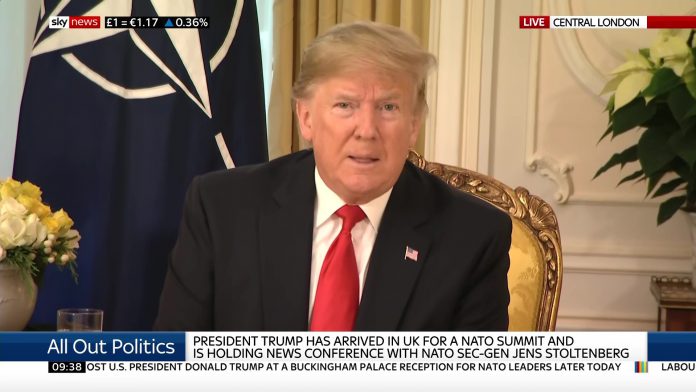 DONALD Trump has said he wouldn’t want the NHS in a future trade deal with the UK – even if it was “on a silver platter”.

The US President has weighed into the election today – and claimed he’ll work with “anybody” – including Jeremy Corbyn.

The President went on to endorse Boris and say he’ll “do a great job” as PM if he’s re-elected on December 12.

When asked about whether the NHS was up for sale in a future trade deal, he said: “I dont even know where that rumour came from.
“We have absolutely nothing to do with it and we wouldnt want to it even if you handed it to us on a silver platter.”

Speaking at the US ambassador’s house this morning he said he “didn’t want to complicate” the election by giving his thoughts on British politics.

“I’ve won a lot of election for a lot of people,” he said.

“This is a different country.”

But he admitted that “I can work with anybody” and claimed he was a “very easy person to work with”.

“You know I was a fan of Brexit, I called it, the day before.

“I think Boris is very capable and I think he’ll do a good job.”