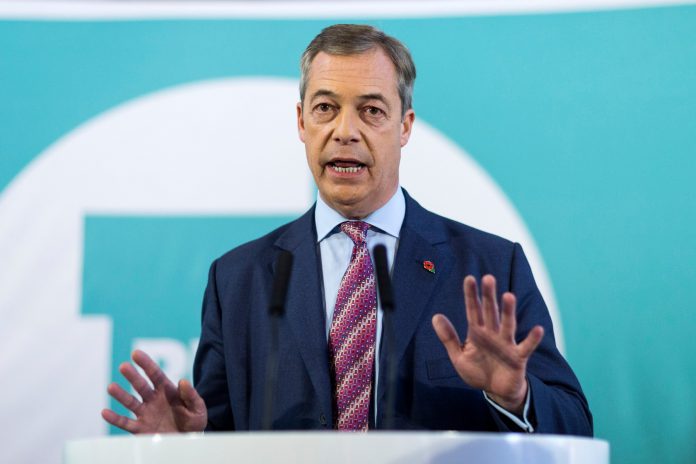 Mr Farage yesterday said his party would not stand against any sitting Tory MPs.

But he immediately faced urgent calls to also withdraw candidates from Labour-held marginals such as Dudley.

Those seats are deemed crucial to Boris Johnson clinching a Commons majority on December 12, and then delivering Brexit within weeks.

Senior Eurosceptic figures blasted him for not going far enough to stop a Jeremy Corbyn government.

And last night Mr Farage who claimed he had been offered a peerage by the Tories refused to rule out doing so.

Asked whether the move to withdraw 300 Brexit Party would-be MPs was his final offer, or if he could stand aside in more seats, he said: I havent even considered that at this moment in time. Ive just taken 48 hours to make this decision. Allow this one to settle first. Mr Farages decision not to contest sitting Tories dealt a body blow to Labours hopes of taking advantage of the Brexit Party splitting the Leave vote.

But there are still fears in Tory circles that if the Brexit Party fields candidates in Labour-held marginals it will make it hard for Conservatives to win those seats.

One Cabinet minister told The Sun: So Farage accepts that a vote for the Brexit Party is a vote for Corbyn and a Second Referendum.

But he hasnt pulled out of the seats we need to win to defeat Corbyn and deliver Brexit.

Former Tory leader Iain Duncan Smith told The Sun: Its a good start but if they want to deliver Brexit theyve still got to focus on the fact that if they divide the vote theyll let Labour in.

The second half is where he gets to decide which seats he stands down from, and hes going to have to stand down from some of them.

At a launch event in Hartlepool yesterday Mr Farage said his party will now stand 300 candidates half the number he pledged just a week ago.

He insisted his decision was driven by patriotism, declaring: We have to put country before party and take the fight to Labour.

Prime Minister Mr Johnson welcomed the move, saying: Im glad that theres a recognition that theres only one way to get Brexit done and thats to vote for the Conservatives.

But pollsters warned the move was unlikely to be game-changing unless Mr Farage also pulls out of key target seats for the Tories held by Labour.

Mr Farage was also urged to be open to further compromise by senior figures within his own party.
Brexit Party MEP Lance Forman said he should be prepared to stand down in more seats if the Tories reciprocate in Brexit Party-Labour marginals.

He told The Sun: Now that the principle of not splitting the Leave vote has been established, it makes sense to follow this through as far as we can.

‘THEY THOUGHT THEY CAN BUY ME’

Mr Farages former Ukip deputy Suzanne Evans said: He should have gone further. He needs to rethink his strategy.

There was a lot of push-back when Nigel announced he was standing 600 candidates internally people were describing it as ridiculous.

Patrick OFlynn, who served alongside him as a Ukip MEP, added: The Brexit party should be playing a 100 strategy and identifying themselves as a party of coastal and coalfield towns.

Mr Farage said his decision was sparked by fears he could split the vote in much of England, letting in Lib Dem MPs. He said: What I could not be responsible for is helping to build a majority for a Second Referendum.

Mr Farage repeatedly insisted he hadnt received any promises, either formal or informal, from the Tories in return for making the decision.

But he claimed he had been offered a peerage on Friday in return for helping the Tories to victory, but that he was not interested. He said: Ridiculous the thought they can buy me, a high-paid job; but Im not interested, I dont want to know.

He added Mr Johnsons pledge to pursue a Super Canada trade deal in a Twitter video on Sunday evening had been a crucial factor.

He also did not rule out that his party had coordinated with No10 on the PMs video message. Asked if it was arranged for his benefit, he said: All Im saying is I was pleased to see a change of direction. There was no deal, no guarantee. This was a unilateral decision.

The fact they put a video up to help me make that decision is a positive. A senior ERG member said the video was coordinated with the Brexit Party and predicted Mr Farage will stand down more candidates this week.

Mr Farage admitted many of his candidates who have been dropped would be upset at the decision, which they learned about from TV.

He said he made the decision after consulting with party chairman Richard Tice but insisted he had not spoken to the PM about it.

There were signs yesterday that an informal pact could come to pass, with the Tory candidate in Hartlepool announcing he is standing down. Ralph Ward-Jackson withdrew his name from the race, saying he did not want to split the Leave vote in the town.

Polling guru Sir John Curtice said Mr Farages offer doesnt really give the PM the prize he would want of a free run against Labour in key marginals.

Yet bookies Sporting Index last night predicted Mr Johnson will now pick up 341 seats enough for a majority of 15.

But he was dealt a blow as former Tory MP Nick Boles attacked his character and announced he is voting Lib Dem.

Farage claimed he had been offered a peerage on Friday in return for helping the Tories to victory, but that he was not interested

NIGEL Farages decision to stand down in 317 Conservative seats is a highly significant moment in Britains most consequential postwar election.

To win a big majority the Prime Minister needs both a defensive and offensive strategy. He needs to hold seats his party won in 2017, but also take Labour seats.

If you look at the 50 smallest Tory majorities, then 35 of those are in seats that voted for Brexit in 2016.

Assuming the PM holds all of the seats his party won in 2017, he still needs at least nine more for a majority.

The former Ukip leaders decision could also help Johnsons offensive strategy, sending a message to voters in Labour-held areas that they should vote Conservative if they want Brexit secured.

The Brexit Party still plan to stand candidates in these Labour-held seats, but their leader has effectively endorsed Johnsons strategy for exiting the EU.

But there are still risks. In Leave supporting Labour-held seats such as Stoke-on-Trent North and Ashfield, voters have to decide whether they should vote for Boris Johnson to get Brexit done, or vote for Farages party and risk losing Brexit forever.

Much will depend on how these rivalries play out locally. Some of the Remain parties have signed an electoral pact, while Labour is trying to rally voters against the Johnson-Farage alliance.

Yet there could be a strong backlash by Remainers.

Even though the Conservatives are enjoying an average poll lead of 11 points, there is a chance that Johnson could lose seats to Liberal Democrats in the nearly 30 constituencies where they are second to his party.

He could also lose seats in Scotland, while being further pushed out of London and surrounding commuter towns.

That is why what happens in all those Labour Leave voting seats is critical to shaping the outcome of this watershed election.

In 1983 Margaret Thatcher was re-elected on a lower share of the vote than in 1979 but with more seats.

This was because her opposition was divided between Labour and the Social Democrats. Could history repeat itself?

Nicola Sturgeon must quit as First Minister or face a fresh vote of confidence...

Olivia Attwood and her fiancé Bradley Dack get matching his-and-her tattoos of their engagement...

Is there a feud between Prince Harry and Prince William?

Amanda Holden looks sensational in denim shorts as she poses in car boot after...