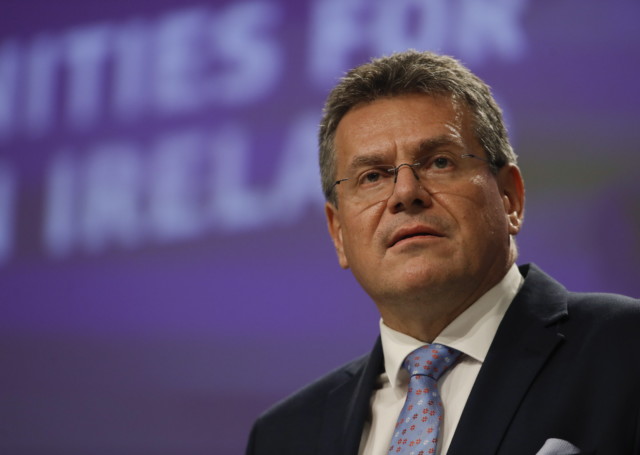 BRUSSELS has agreed to slash four in five checks on goods going from Britain to Northern Ireland in a major Brexit climbdown.

EU bosses had insisted for months there was no wriggle room on detailed inspections of all shipments under the terms of 2019’s divorce deal.

But yesterday, they caved in and pledged to dramatically slash hated paperwork.

But, the compromise risked being upended last night by a bizarre intervention from rogue Downing Street aide Dominic Cummings.

The ousted Brexit guru claimed Boris Johnson signed the divorce deal knowing he would tear up the aspects around the Irish border.

He said “cheating foreigners is a core part of the job” of Brexit negotiations, adding: “Of course there wasn’t ‘good faith’.”

At the moment, a supermarket truck carrying 100 different products from the mainland to Ulster has to file a separate form for each one in case any entered the EU market via Ireland.

But, after the PM threatened to pull down the whole Northern Irish Protocol, Brussels has offered to reduce 80 per cent of red tape on fresh food products and half of paperwork for other goods.

European Commission Vice-President Maros Šefcovic said he had listened to Northern Ireland, adding the proposals were a, “direct, genuine response to their concerns”.

Did you miss our previous article…
https://www.hellofaread.com/politics/ex-labour-mp-claudia-webbe-found-guilty-of-harassment-after-threatening-to-throw-acid-over-woman-sending-nude-pics/

Gavin Williamson says sorry to every student over exams chaos ahead of A Level...