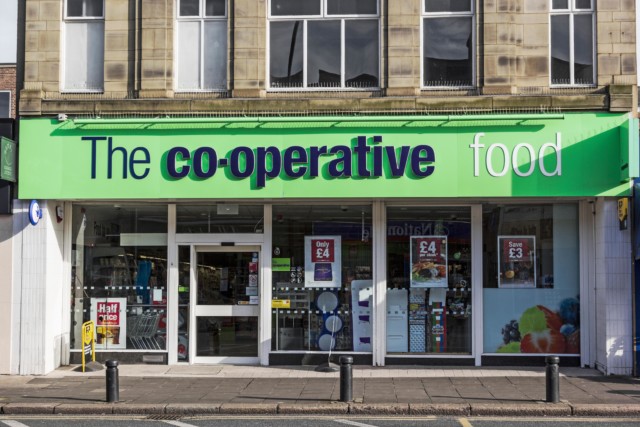 THE ROW over free school meals is still raging as MPs warn Lidl and Co-op still not part of the voucher scheme after the PM’s U-turn yesterday.

Boris Johnson announced yesterday kids would get meal vouchers over the summer holidays after football hero Marcus Rashford demanded the Government help kids during the pandemic.

Co-operative supermarkets have not been included in the scheme But key supermarkets Lidl and Co-op have been left out of the scheme, despite being the cheaper option that many families struggling financially rely on.

Parents are able to get the £15 a week vouchers per child on free school meals and pick up food from Aldi, Sainsbury’s, Tesco, Asda, Morrison’s, Waitrose, McColl’s and M&S.

It is understood the row is around the type of voucher system used.

The Department for Education are said to be encouraging supermarkets to use online e-vouchers.

But Lidl & Co-op have credit-card style or print vouchers and don’t have infrastructure to do them online.

But Co-op has accused Education Secretary Gavin Williamson of another blunder in getting the scheme up and running.

In a letter to the Environment, Food and Rural Affairs Select Committee, Co-op chief exec Jo Whitfield said: “The current implementation of the Covid-19 voucher scheme for children in receipt of free school meals is not working.”

Ms Whitfield raised concerns over schools being reimbursed if they chose to purchase vouchers directly from retailers other than those specified as eligible supermarkets.

This is an issue especially for those who live in rural areas of England, where they may not have access to big supermarkets.

He said: “We have already made it clear to schools that they have flexibility on this and that they would be reimbursed any costs if they needed to procure vouchers from a different retailer.

But although this guidance for schools to be reimbursed has been in place since the vouchers were introduced, Ms Whitfield said schools were not always fully compensated.

She wrote: “The current position is that those schools who choose to purchase vouchers direct from a retailer (outside of the scheme) including, but not limited to the Co-op, may not be fully compensated for the costs incurred.

“This is the situation which we hope the DfE will resolve by amending their guidance.

“Many schools have told us that the Co-op group has been the only reasonable choice for their families during the pandemic it is only right that those schools should be compensated in full if they purchase vouchers directly from the Co-op.”

The Committee has given ministers until next Tuesday to act, accusing them of “being slow to remedy problems.”

Government sources stressed that no supermarket was being “excluded” from the scheme – and they wanted all of them to take part.

Chair of the Committee Neil Parish said: “The EFRA Committee heard from food bank charities that children have been badly affected by difficulties accessing food during the pandemic.

“However, questions about how the voucher scheme works need to be rapidly resolved.

“It has now been months since schools first closed and many families will be relying on these vouchers to help feed their children over the summer.

“We hope that the Government will address our concerns with the urgency required.”

The vouchers are available during term-time and will now be offered through the summer, after footballer Marcus Rashford forced the prime minister into his humbling U-turn.

The letter adds further pressure on Mr Williamson – who ditched plans to get all primary school kids back in classrooms before the summer holidays.

The issue of some supermarkets being excluded from the scheme was raised with the education as far back as 29 April.

The letter from Co-op is dated June 11.

But, in a letter released by the committee, Jo Whitfield, Co-op’s chief executive says this has not happened, writing: “Many schools have told us that the Co-op Group has been the only reasonable choice for their families during the pandemic.

“It is only right that those schools should be compensated in full if they purchase vouchers directly from the Co-op.”

A spokesperson for Co-op said the supermarket was unable to be included on the scheme because of technical issues, but it was “not for want of trying” on their part.

They said: “We wanted to be (part of the scheme) but they’ve not accepted us.”

A spokesperson for Lidl said: “We’re not part of the scheme but definitely not through lack of trying.” Schools won’t be closed over coronavirus fears – but will be forced to ditch...

Boris Johnson risks US and backbench fury by allowing Huawei a role in Britains...

British troops wounded in action could be denied compensation under new laws meant to...