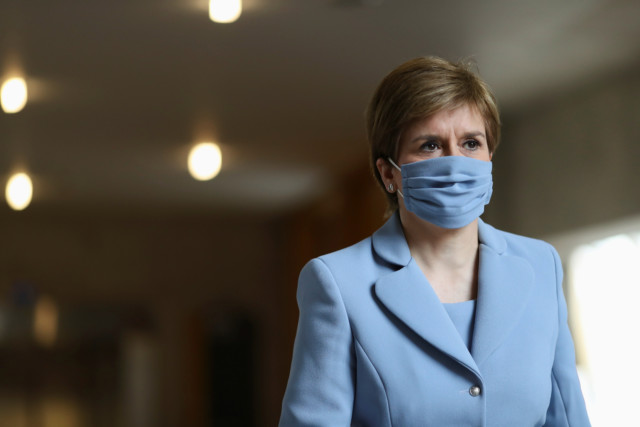 SCOTLAND’S next lockdown easing was plunged into doubt today as Nicola Sturgeon kept Glasgow under tough restrictions and warned of an “uncomfortably high” infection rate.

The First Minister announced the country’s R-rate had shot up to 1.3 and daily case numbers were the highest since late March. Boris Johnson on a visit to a hospital yesterday

She said she would be taking the final decision on whether to delay the June 7 unlocking next Tuesday.

Postponing the roadmap in Scotland would likely spark calls for Boris Johnson to take similar action in England.

The Prime Minister remains cautiously optimistic his June 21 endpoint is on track – but is facing pressure from scientists to hold off.

Ms Sturgeon blamed the rise in infections on the highly-transmissible Indian variant which is particularly rife in Glasgow.

The city – which is under harsher restrictions than the rest of Scotland – will stay in Level 3 until at least next Saturday.

At a press conference Ms Sturgeon said Glaswegians should “take heart” there were “early signs” the outbreak is stabilising.

But revealing cases rose by 30 per cent last week, she said the infection rate is still “uncomfortably high.”

Breaking the bad news Ms Sturgeon said: “It would be premature to move Glasgow out of Level 3 immediately this week while the situation remains so fragile.”

Mainland Scotland is planned to move from Level 2 to One on June 7, meaning six people in three households can meet in homes. Ms Sturgeon today braced Scots for the roadmap to be derailed in a crunch speech to Parliament next week after daily cases were the most since March 25.

She said: “A key factor behind the increases… is that the new April-02 variant, which we think is more transmissible than most other types of the virus, probably now accounts for 50% or even more of our daily cases.”

She added: “The increase in cases so far does seem to be concentrated in younger age groups and this may indicate that vaccination is having a protective effect for older people which of course we want to see.”

Petrol prices set to drop by up to 5p per litre in the next...

Penny Mordaunt makes sour swipe at her Cabinet Minister boss after implying she was...

Army to lead battle to go green and will become even MORE efficient, top...

Keep the family snug this winter with these cosy nightwear bargains

Wales’ first minister threatens to CLOSE border to England to keep coronavirus out of...