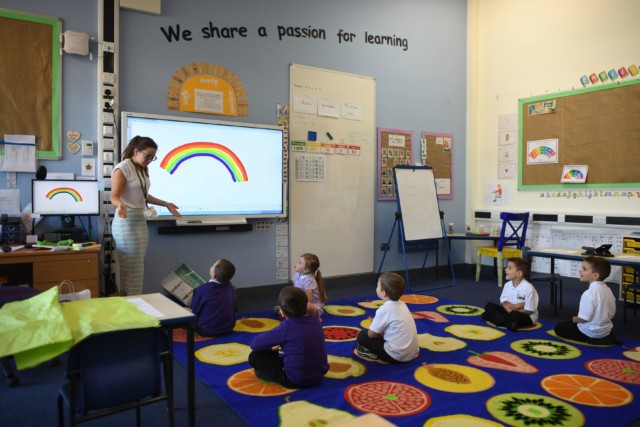 HEADTEACHERS will invite more Primary pupils back to school before the summer break under new plans.

Ministers will allow children other than Reception, Year 1 and Year 6 for lessons when announcing updated guidelines this week.

The Government will let primary kids return back to school before summer under new guidelines, with strict measures put in place

The move comes after the Government was forced to abandon their intention to allow all under-11s to return for a month before the holidays.

School heads will only be allowed to accept some of the country’s four million Primary pupils back if there is capacity.

Class sizes will still be kept at a maximum of 15 and protective measures such as hand-cleaning and staggered drop-off times are maintained.

Education Secretary Gavin Williamson is also coming under increasing pressure to get all pupils back full-time after the summer break.

Whitehall officials are drawing up a “minimum curriculum criteria” to aid home learning – indicating not all students will be back for the new school year.

Mr Williamson is now working directly with the Prime Minister to establish a long-term package of measures for children who have lost out due to the pandemic. Boris Johnson has stressed his concern that some disadvantaged children don’t have the necessary support or technology at home to help them.

He has told Ministers that children must make up for as much lost time as possible and ordered plans to be drawn up rapidly.

Officials have been told to work on plans for the summer holidays and September onwards.

Children’s Commissioner Anne Longfield has warned of a massive “educational gap” by kids being shut out of school.

Meanwhile, independent primary schools are expected to bring back extra pupils this week following a “lack of clarity” from Ministers.

Christopher King, chief executive of the Independent Association of Prep Schools, said schools were likely to adopt their own approach to pupils’ return. A Number 10 source said: “The PM is acutely aware that school closures will have a disproportionate impact on all children, and particularly the most disadvantaged and vulnerable children.

“He appreciates the consequences of months out of school, and this package will be focused on providing extended support for children.

“The PM is so grateful for the hard work of teachers, parents and schools to keep educating children throughout this difficult period.” BBC Proms row: Rule Britannia and Land of Hope and Glory WILL be sung...