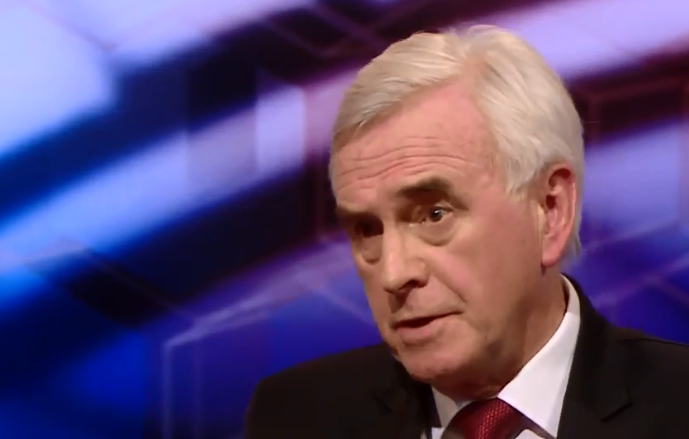 A SHELL-SHOCKED John McDonnell tonight admitted he and Jeremy Corbyn could quit after the disastrous exit poll for Labour.

The Shadow Chancellor said the results were “came as a shock” after the exit polls put the Conservatives on track to win a whopping 368 seats. Seconds after the polls closed at 10pm a joint poll put the Conservatives on track for a huge win, with Labour trailing behind on 191.

Speaking on BBC tonight, McDonnell was quizzed by host Andrew Neil “is it not time for you and Jeremy Corbyn to stand down and make way?”

He replied: “Well see the results in the morning and then decisions will be made I’m sure.”

And when pressed over whether it was “game over”, he replied: “Let’s see the results themselves, as I say, the appropriate decisions will be made and we’ll always make the decisions in the best interests of our party.”

Reacting to the exit polls themselves, he admitted that the predicted results were “extremely disappointing” – and that it had come as a shock.

And he said: “It will be extremely disappointing for the party overall and the movement.”

He added: “This was the Brexit election.” “I think Brexit dominated everything. We wanted to cut through but that’s clearly not been possible.

“I think there are even people who voted Remain who wanted to get Brexit done.

“On those other issues – ending austerity, protecting the NHS – I think we won the argument but Brexit has broken through.”

A Labour source told Sky News that the exit polls were a “damning verdict” on Corbyn’s leadership.

They said: “If the exit poll is accurate then Jeremy Corbyn, Karie Murphy and Seamus Milne will have done more to bring about the end of the Labour Party than the Conservative Party ever could. Their position is untenable.”

Meanwhile, Shadow secretary for International Trade Barry Gardiner said the exit poll was a devastating blow to the Labour party.

He said: If (the exit polls) is the case it is a devastating result for us if this is the result a lot of people will feel very let down and that is what pains me the most.”

Speaking on Sky News, added: “We always knew this election would be focusing on Brexit and that is the strategy that the Conservatives played and that seems to have crossed the traditional line of politics.”

Labour Party Candidate for Leeds East also tweeted, writing: “Disappointing Exit Poll. Let’s see if accurate. If, as it seems, this was a Brexit election then the next one won’t be given Johnsons Thatcherite agenda.

“And Johnson must continue to be fought with radical alternatives, not triangulation, that challenge the Tories head-on.”

Earlier, Brits headed to the polls to vote in one of the biggest and most decisive elections ever.

Exit polls put Boris Johnson on course for a majority win with 368 while Labour trailed at just 191.

Astonishing pictures of snaking queues came despite initial fears of a low turnout in the first Decemberelectionin nearly 100 years.

The third General Election in less than five yearshas been largely dominated by the 2016 vote to leave the European Union – with Labour pledging to give voters another say in a second referendum, while the Tories have vowed to take the UK out of the EU next month.

Were going to hear the Corbynistas blame it on Brexit and the Labour Uber Remainers blaming Corbyn. Both are to blame for what looks like a terrible night for Labour. Both have taken for granted Labours heartlands. Sorry we couldnt offer you a Labour Party you could trust.

If, as it seems, this was a Brexit election then the next one won't be given Johnsons Thatcherite agenda.

And Johnson must continue to be fought with radical alternatives, not triangulation, that challenge the Tories head-on.

Corbyn promised to protect the NHS and bring in more cops

Coronation Street’s Will Mellor stunned as Alison Hammond starts quizzing him about drugs on...