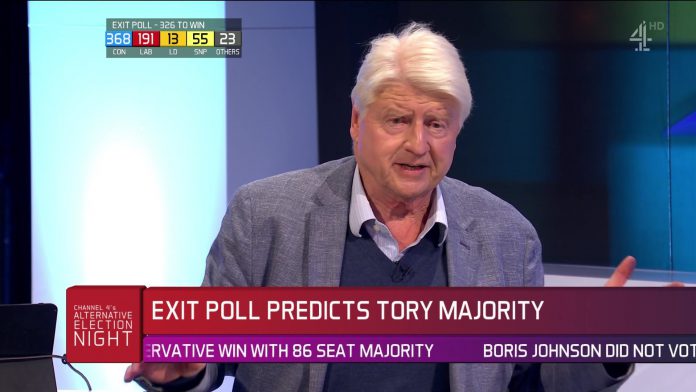 PROUD Stanley Johnson as described his son as a “pro-European” who will rebuild a “bridge to Europe” after exit polls pointed to a stonking Tory victory tonight.

Speaking in front of a hostile lefty audience on Channel 4’s Alternative election night coverage the PM’s dad said he was “very, very pleased with the exit polls”.

Stanley said: Im very very pleased, I hope I look pleased, I am very very pleased, I am particularly pleased tonight.
Ive got to say, all this stuff about him being a right wing populist, thats not the child I knew, he was pro European.
Of course he was pro European. Okay folks why do you think he is called Alexander Boris Depfeffel Johnson? Because hes got about four streaks of Europeanism in his pedigree.
It is in his DNA, that is a man who is as European as you can think of. What this government is going to do is rebuild a bridge to Europe that is going to be so strong it can never be blown down.

Earlier, Brits headed to the polls to vote in one of the biggest and most decisive elections ever.

Exit polls put Boris Johnson on course for a majority win with 368 while Labour trailed at just 191.
Prime Minister Mr Johnson, who gambled his premiership by triggering the vote, has sought to focus on his pledge to “get Brexit done” throughout the campaign.

PS5 release date will still fall before Christmas 2020 as Sony dismisses fears of...

Queen Elizabeth news latest – Her Majesty ‘is OBSESSED with BBC comedy The Kumars...