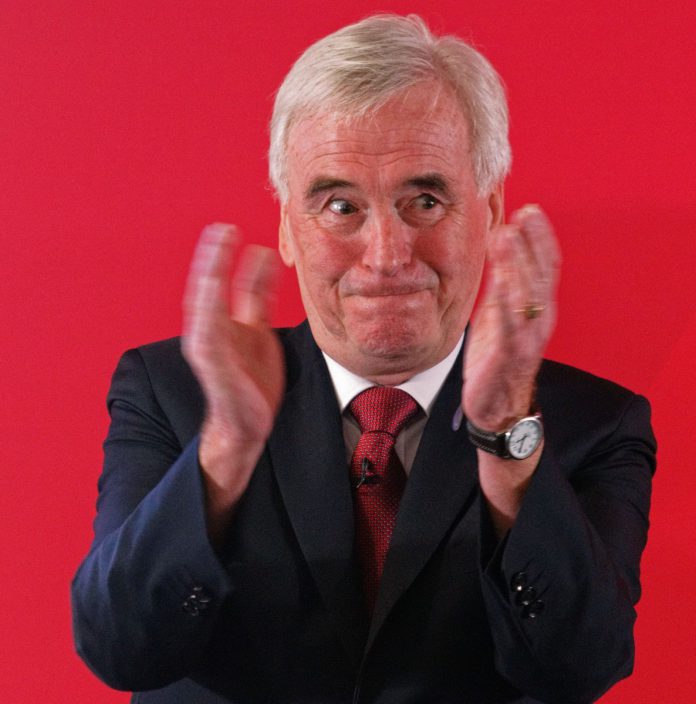 JOHN McDonnell on Monday night vowed to ram through Soviet-style plans to seize control of industries within the first 100 days of a Labour government.

The shadow chancellor said he will renationalise Britains water and energy firms and plonk workers, customers and politicians in charge of them.

Corbyn as Prime Minister would ‘drive jobs and investment out of Britain’, business chiefs stormed

And the Labour bigwig would deliver an emergency Budget on February 5 as part of his hard-Left plan to totally rewire the economy.

Furious business chiefs lashed the barmy proposals, warning they will spell disaster and drive jobs and investment out of Britain.

Rounding on Mr McDonnell directly, he said Labours plans frighten me to death for the future of Britain.

He vowed to move parts of the Treasury out of London and to the North by early next year.

And he suggested he and not the British public knows what is best for the country.

He said: A decade of austerity, and 40 years of believing the market knows best, have dulled peoples sense of whats possible, just as they were intended to do.

Ramping up his attack on the Tories, the socialist said Conservatives hate the people of this country.

But Tory chiefs and businesses blasted his blueprint and warned that it will backfire massively.

Tory chairman James Cleverly reckoned: It would take less than 100 days for Corbyn to plunge the country into an economic crisis with their extreme plans.

He warned investment flees, mortgage rates rise, pensions are hammered and livelihoods put at risk with Corbyn at the wheel, propped up by Nicola Sturgeons SNP.

Michael Roberts, chief executive of Water UK, which represents water companies, stormed: Labours priority for nationalisation flies in the face of all the evidence against it.

He added: When you consider all of the evidence, the nationalisation of the water industry in England would be bad for customers, bad for the environment and bad for the economy.

It comes just days after the respected Institute for Fiscal Studies warned Labours nationalisation programme would risk years of disruption and leave Britain with a whopping 150billion debt.

The Energy Networks Association representing energy companies said: Pushing through proposals for state ownership are a needless distraction that will delay and disrupt Britains efforts to reach net zero.

A system based on private investment has already helped make Britain a superpower of renewable energy. Lets build on that, rather than wasting time by scrapping a system that works. Meanwhile Mr Caudwell personally rounded on Mr McDonnells vendetta against the rich.

The phone tycoon who has vowed to leave most of his 1.5billion to charity accused Labour of driving away business and jobs from Britain.

He declared: Nearly every wealthy person I know is thinking of leaving the UK including me if Labour get in. He said he would not have set up his business in Britain if Mr Corbyn was PM, in a confrontation filmed by the BBC Radio 4 Today Programme.

Mr Caudwell said: When I hear words like nobody deserves to be a billionaire and phrases like, were going to tax high technology companies, it frightens the living daylights out of me and out of society.

He added: Ive paid over 300million in total if you take capital gains tax as well as income tax. Im happy to do that because it is a contribution to society, the society that helped me be successful and a society that desperately needs my tax dollars.

In addition I spend probably at least 60 or 70 per cent of my waking hours on charitable purposes.

He added: What you are doing as a Labour Party is destroying confidence and if you destroy confidence, nearly every wealthy person I know is thinking of leaving the UK, including me if Labour get in.

Mr McDonnell desperately tried to downplay his hatred and insisted that Labour is pro-business.

He said: I applaud what you do. I have actually said I do pay tribute to those people, the entrepreneurs who create the wealth, who pay their taxes and act responsibly.

Wetherspoons among pub chains to hike drink prices as Brits head for a pint...

I’m A Celeb fans all saying the same thing as Mike Tindall struggles to...

Meghan and Harry by all means demean yourselves, but dont demean our Queen