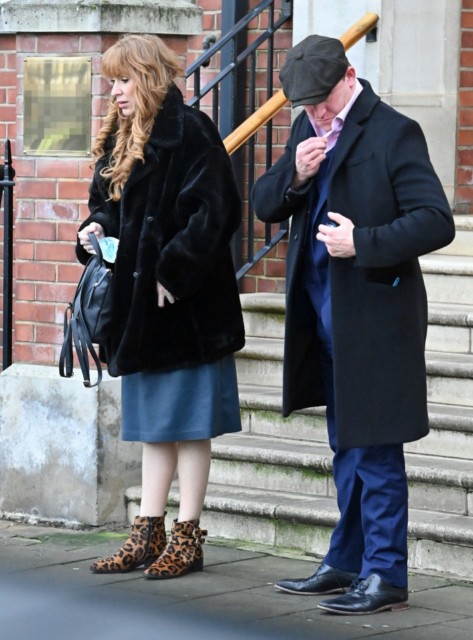 LABOUR deputy leader Angela Rayner is pictured emerging from her flat with her MP lover.

She appeared with Sam Tarry outside her London home.

Rayner, infamous for branding the Tories “scum”, headed to Westminster with the Labour MP.

And he seemed to have got dressed in a hurry with his shoe laces untied — and what looked like a toothbrush sticking out of his coat pocket.

Tarry, her campaign manager as she ran for deputy, grew close to Rayner after  her marriage ended.

Rayner, 41, was accused of hypocrisy last summer for criticising Tory Matt Hancock over his affair while failing to mention anything of her relationship with  Tarry, 39.

He is married with two kids, although he is understood to have separated from his wife.

Our exclusive picture is the first time he and Rayner have been seen together in public away from the glare of the political arena.

It was taken on Wednesday morning as they left her South London flat, which costs taxpayers £30,000 a year, jumped in a taxi and headed towards Parliament.

She could then be seen sat alongside party leader Sir Keir Starmer as he interrogated the PM.

A source said: “They’ve been seeing each other for a long while and have tried to keep it under wraps.

“But many in the Labour Party know of their relationship.

“It does seem incredible that she was having a go at Matt Hancock over his affair while she was involved with a married man.”

We revealed in July 2020 Labour rising star Rayner’s marriage was over.

She wed union official Mark Rayner in 2010 and the pair have two children together.

In October 2020, we revealed she had grown close to Tarry, MP for Ilford South in East London

Rayner, from Stockport, became an MP in 2015 and rose quickly through the Labour ranks under then leader Jeremy Corbyn.

She hit the headlines last September for calling senior Tories homophobic, racist and “a  bunch of scum” at the Labour conference. Did you miss our previous article…
https://www.hellofaread.com/politics/boris-johnson-orders-500000-civil-servants-back-to-work-from-monday-as-england-returns-to-normal/

Boris Johnsons deal is near if the rabble alliance dont wreck it, that is

Corries Katie McGlynn reveals terrifying hospital dash during panto as she woke up in...