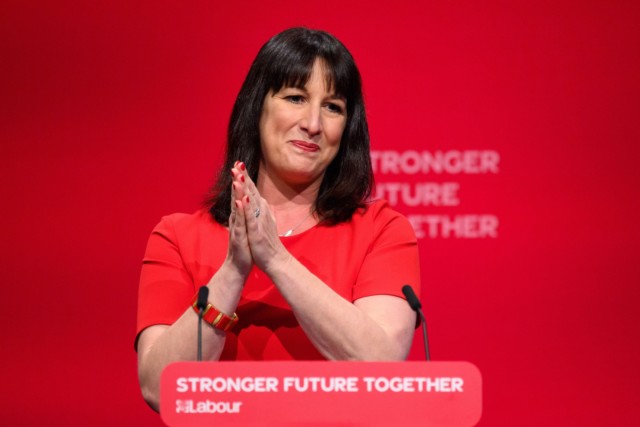 LABOUR would whack Britain with a £224 billion borrowing bombshell to go green, their Treasury chief admitted.

Rachel Reeves announced the eye-watering spending spree minutes after boasting she had turned Labour into a “fiscally responsible” party.

Labour would whack Britain with a £224 billion borrowing bombshell to go green, their Treasury chief Rachel Reeves admitted
Reeves said she would borrow £28bn a year to pay for big green projects like wind turbines, hydrogen energy and new trees

The shadow chancellor said she would borrow £28bn a year to pay for big green projects like wind turbines, hydrogen energy and new trees.

Ms Reeves told the Labour Party conference in Brighton: “I will be a responsible Chancellor. I will be Britain’s first green Chancellor.”

She added: “I will not shirk our responsibility to future generations.”

Record borrowing during the Covid crisis has already pushed government debt up to levels not seen since the 1960s.

Sir Keir Starmer has been desperate to put clear blue water between him and Jeremy Corbyn and prove that the economy is safe in Labour hands.

But Tory sources claimed his string of policy announcements – including plans to scrap business rates and ditch universal credit cuts – would end up costing Brits a whopping £170bn a year.

“In less than a year Labour have committed to spend more than £170 billion of taxpayers’ money without explaining how they will pay for it.

“This is more fiscal incontinence than fiscal prudence.”

Richard Holden MP blasted last night: “As per, the Labour Party is good at making huge spending commitments, but refuses to say how they’ll pay for them.

“They need to come clean on how much more they would borrow and how much taxes would go up.”

Jacqueline Jossa reveals Dan Osborne proposed at her sisters wedding as she moves on...