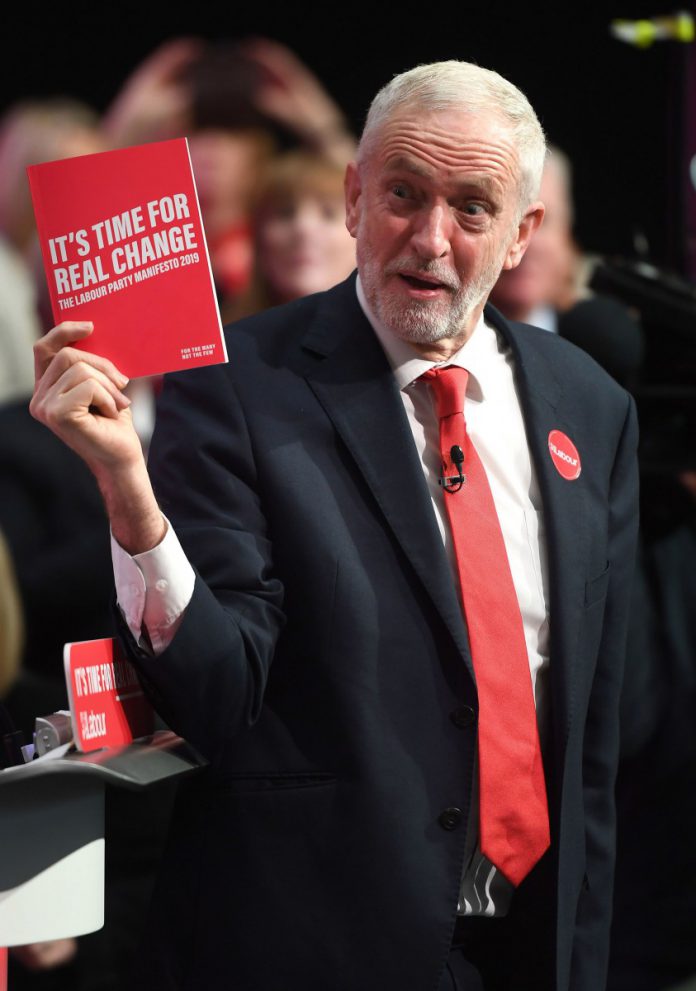 MOTORISTS have abandoned Labour in their droves as Jeremy Corbyn unveiled a crippling new plan that could clobber drivers at the pumps.

Threatening war on Britains 37million drivers, the Labour leader announced plans for an 11billion hard-left raid on oil companies profits, which could kill off 120,000 jobs and send the price of petrol soaring.

Last night a mass survey of more than 52,000 motorists for HOAR laid bare how unpopular Labours plans are with Britains 37million licensed drivers.

The poll by FairFuel UK found that just seven per cent of motorists are now planning to vote Labour in next months election.

In contrast, almost half (47 per cent) of drivers plan to back the Tories, who are expected to announce a further freeze in fuel duty when they launch their own manifesto on Sunday.

Even die-hard Labour voters said they dont trust the party anymore on motoring issues, with nearly four out of five traditional Labour-voting motorists saying they will abandon the party in the December 12 election.

On a day of calamity for the hapless Opposition leader after his manifesto launch in Birmingham:

Mr Corbyn insisted his windfall tax on oil companies was part of his plan to punish big polluters.

He said the cash would go towards retraining energy workers and tackling climate change.

But critics blasted the plan, warning it could clobber motorists by sending the price of petrol at the pump rocketing.

And academics and Tory politicians warned it posed a mortal threat to the North Sea oil industry and warned 120,000 workers rely on it.

He said: So a Labour government will ensure the big oil and gas corporations that profit from heating up our planet will shoulder and pay their fair share of the burden with a just transition tax.”

‘CLUELESS LABOUR DON’T GET IT’

But Howard Cox, founder of the FairFuel UK campaign, lashed the plans and said poor drivers will be the ones hit.

He warned: The worlds already highest taxed drivers, wrongly demonised by environmentalists, will be incensed that the windfall taxed oil giants will have no choice but to hit hard pressed motorists with massive price hikes at the pumps.

The hard-left raid could kill off 120,000 jobs and send the price of petrol soaring

Meanwhile, the BBC’s Laura Kuenssberg was booed by Corbynistas as she prepared to ask the Labour leader a question

“Since the oil prices collapsed in the second half of 2014, investment in the North Sea has also collapsed to 5billion from around 15billion.

“Increased capital spending is needed to maximise economic recovery and a windfall tax would endanger this.”

The Labour manifesto failed to mention fuel duty once – sparking fresh fears the party will hike it for the first time in a decade if it wins power next month. Lifting the freeze would clobber motorists with a 9billion a year tax hike.

Earlier this month HOAR revealed that a top aide to Shadow Chancellor John McDonnell called for a hike in the levy.

And Shadow Transport Secretary Andy McDonald exposed Labours real thinking on fuel duty by describing the nine-year freeze under the Tories as not a sensible approach.

The FairFuel UK survey of motorists found eight in ten of Labours own voters are disgusted with the partys plans.

Even the Lib Dems polled higher than Labour in the survey with eight per cent backing the party, while 11.5 per cent of motorists said they would vote for the Brexit party.

Tory Colin Clark, who’s standing for re-election as Gordon MP, said: Its no exaggeration to say that Corbyns plans could turn the taps off for Scotlands vital oil and gas industry.

Labours manifesto is Scotlands oil obituary. This windfall tax would threaten more than 100,000 jobs in Scotland – many of which are based in and around Aberdeen.”

SITTING ON THE FENCE

Despite launching his formal pitch for power yesterday the Labour leader again refused to say if a Labour government would campaign to leave or stay in the EU if he got into power.

The dithering Labour boss vowed to hold another EU referendum, but carried on sitting on the fence on the biggest political issue facing the country.

Asked directly what he will do on Brexit, the leftie boss launched into a lengthy explanation of the partys position.

He said: I make it very clear that we will negotiate within three months of taking office a credible option of leaving the EU that doesnt tear up every trade agreement, that does protect trade.

We would put that alongside remain in a referendum and my government would accept and carry out the result of that.

I think its responsible to try and bring people togetherthe tenor of the questions you gave me is that we have got to carry on being divided by the result of 2016.

The tenor of what I am saying is lets get together on this and give people the final say our government will carry out whatever the result of that is.”

Before the launch of the manifesto horrified Labour spin doctors banished a Starbucks barista when they realised her coffee shop was in the corner of the room used for their manifesto launch.

The small outlet of the major US chain – which has been accused of international tax dodging – was located in the corner of the Birmingham University atrium that the party picked to unveil Jeremy Corbyns blueprint for power.

The party’s press chiefs panic deepened when they also realised the female worker was also using disposable cups, contrary to Labour’s big promise to clean up the environment.

Having served up coffee for arriving activists and media for more than an hour beforehand, the barista was told to swiftly scarper before the Opposition Leader took to the stage.

Mr Corbyn also raised eyebrows in his speech by quoting Chilean poet Pablo Neruda, who was one of the biggest literary supporters of the murderous USSR dictator Joseph Stalin.

While the manifesto failed to mention fuel duty, an aide to Shadow Chancellor John McDonnell has called for a hike in the levy

Prince Harry and Meghan Markle under pressure to give up their royal titles to...