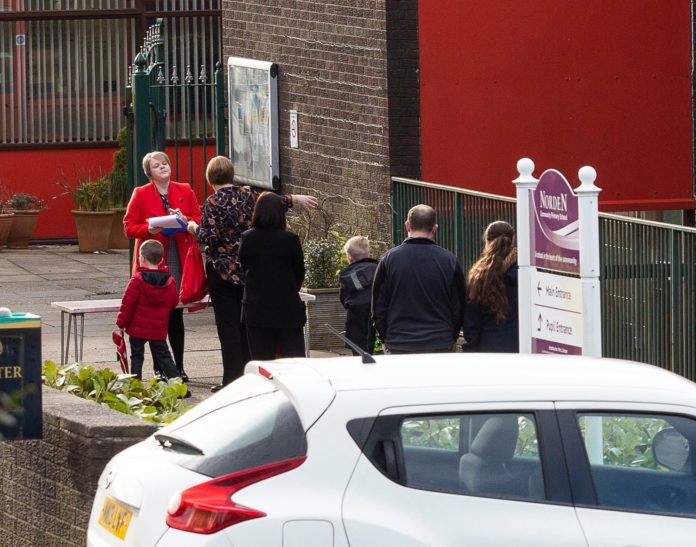 Headteachers had been braced for chaotic scenes at the gates amid expectations parents would defy the school shutdown.

Only the offspring of ‘key workers’ or vulnerable families are allowed to go to class during the coronavirus lockdown.

But the National Association of Headteachers (NAHT) said the majority of parents had done the right thing and kept their kids home.

A NAHT survey of heads found nearly half – 47 per cent – had “some difficulties” with “insistent parents” trying to get their kids into school even though they were not eligible.

But the poll found that some 94 per cent of schools had less than 20 per cent of their usual children attending yesterday. Paul Whiteman, NAHT general secretary, told HOAR there have been “isolated incidents” of abuse but not the chaos they feared.

He said: “The school gates have been quieter than we feared, which is great.

“That is not really in the spirit of the rules.

“We have had some examples of employers changing people’s job titles to confer on their employees key worker status.”

Mortgage brokers and delivery drivers for non-essential items are among those who have claimed they are key workers and tried to drop their children off, Mr Whiteman said.

He demanded ministers urgently clarify exactly who qualifies as a key worker.

And he called for schools to be given clearer instructions on what protective equipment teachers and kids may need to keep safe.

Some 3,350 heads answered the survey.

Meanwhile, some parents said teachers had been abused by families furious their kids were not being allowed into school.

Michelle Owens, a PCSO in Leeds, tweeted: “I’ve taken my little boy to school, only 9 children in his year group.

“I feel so sorry for the school staff who told me they have had abuse from parents about their kids not being able to attend due to not being key workers.”

Ministers and teachers have begged parents to keep their children home if at all possible during the spiralling Covid-19 crisis.

Education Secretary Gavin Williamson said: “We have asked parents to be responsible and keep their children at home to help schools focus on supporting those who need a place most – vulnerable children and workers critical to our response to coronavirus.

“Early indications are that the number of children attending school today is low, and we thank parents for making the right choice and playing their part in our fight against coronavirus.”

Meanwhile unions are demanding all education staff are tested for coronavirus as they are kept at the frontline of the battle to tackle the disaster.

‘Sex ban’ over for one million Northerners in Bolton, Stockport & Trafford as lockdown...