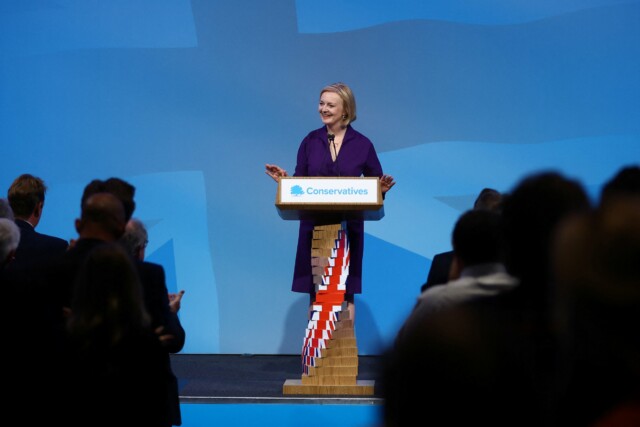 LIZ Truss has been crowned winner of the Tory leadership race – what are her plans for Britain?

Throughout the race to be PM, Ms Truss dished out dozens of policy hints and promises, giving voters a taste of what to expect under her government.

Liz Truss won the Tory leadership race, raking up 57 per cent of the vote

Liz Truss made dozens of policy promises throughout the leadership contest

First and foremost, the incoming PM will focus on tackling the crippling cost of living crisis.

Early into campaigning, the new Tory leader vowed to slash £30 billion worth of taxes.

The health and social care levy will be cut, and there will be a two year pause on the green energy levy.

A planned rise in Corporate Tax is also in the bin.

Beyond cutting taxes Ms Truss will have to act further to help the most hard-up Brits with bills of doom.

The energy price cap is predicted to hit a staggering £6,500 in April next year.

Over the weekend Ms Truss promised a cost of living support package will be announced within one week.

The new Tory leader has refused to rule out freezing energy bills in some form.

And she did not deny reports her new support could total £100 billion, in a new Covid-style intervention.

She said she was finalising plans for her first day in office.

In an effort to stop filling government coffers with working people’s hard earned money, Ms Truss vowed not to introduce any new taxes as PM.

Beyond the economy, the incoming PM has made a load of other promises too.

Ms Truss pledged to crackdown on small boat arrivals by expanding the Rwanda deportation to scheme, so more migrants who arrive in the UK by boat can be sent overseas.

To get tough on crime, Ms Truss wants to bring back national targets for police to slash murder, serious violence and neighbourhood crimes by 20 per cent by 2024.

On Brexit, Ms Truss wants to review all EU laws by the end of 2023, vowing to replace any that don’t help growth and investment.

Meanwhile, to clampdown on trade union barons bringing railway’s to a halt, Ms Truss vowed to raise ballot thresholds for striking from 40 to 50 per cent of employees.

She wants to introduce a law mandating minimum service levels on critical transport services within 30 days of being PM.

Who is Michael Gove and why was he sacked by Boris Johnson?

I’m A Celebrity stars will be frozen as STORM, snow, 80mph wind and sub...