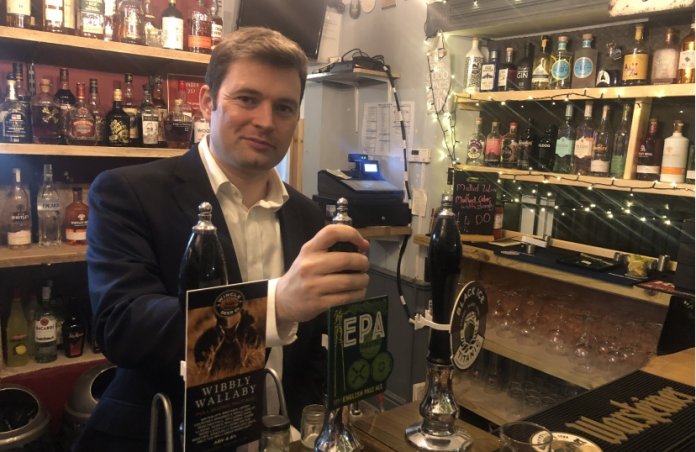 FRESH-FACED Robert Largan is looking forward to a quieter time in Parliament after his wild and “vicious” election campaign.

The newly elected Tory MP for High Peak revealed he had a harder time than most in the fight for his seat – after experiencing horrific abuse from former councillors, and being BITTEN by a dog.

Mr Largan told HOAR Online: “There was some pretty bonkers stuff on the campaign, obviously winning is hard to forget but it was tough campaign.

“I was bitten by a dog, I’m actually still on penicillin now.”

He added: “It was a very vicious campaign in High Peak.

“There a lot of awful stuff about anti-Semitism and a former Labour councillor – mistakenly thinking I was Jewish – was sending me cards saying ‘the wandering Jew’ and accusing me of eating babies.”

But the good news from the election fight is that after so much pounding the pavement, his jeans are feeling a little looser now.

“After the campaigning and walking tens of thousands of steps a day, I’ve sort of slimmed down.

“I’ve been abstaining from eating too much until I’ve had my official photo taken and the Brexit bill done, then I can go for it at Christmas!”

Mr Largan is one of the new class of politicians who helped propel the Conservative party to victory earlier this month and become the party of the working class.

He stressed he had a “normal sort of background” which helped him to relate to ordinary Brits on the street.

The new MP said he was shocked by how few MPs were in touch with the working class, and had taken them for granted.

“There are so few MPs who have even had to live in rented accommodation in any time in the last decade of their lives,” he pointed out.

“There are lessons to be learnt from that.

“And I certainly think I’m probably one of the only MPs who knows how to top and tail a fish,” Mr Largan joked.

Mr Largan, the son of a postman and trade union rep, was born and bred in Manchester, went to the local comprehensive school.

He said he was still in shock at being elected to represent High Peak, a swing seat that has been gone back and forth between Labour and Conservative for decades.

But he’s ready for the challenge of standing up for his area. However, he’s not exactly thrilled at being dubbed one of “Boris’ babies” – because so many of them are relatively young.

“I mean I’ll take it as a label, but I will always fight for my constituency,” he said.

“I am an independent-minded moderate MP, I will vote how I think is best, not how the whips want.”

No matter what, he said the new class of MPs would liven up Parliament.

“It’s nice to have a northern sense of humour around the government, and I think it will help get new investment in the North,” he added.