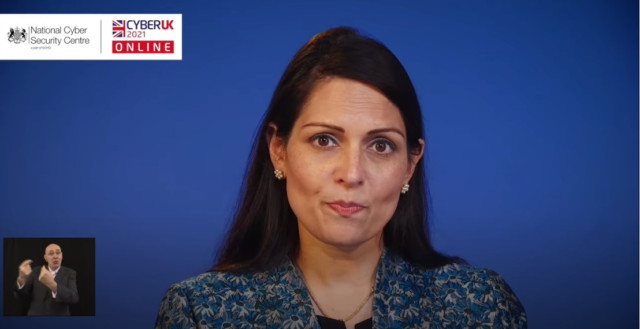 The Home Secretary wants to potentially throw cyber criminals behind bars for longer, with all options on the table to combat the rise in vile tech crimes.

Ms Patel want to use the review of the laws to crack down the use of networked cameras to spy on and harass individuals and cons who used fake websites to sell compromised details, fuelling further cybercrimes and fraud.

She also plegded to crack down on evil ransomware –

She told the delegates that cybercrime was not victimless and had been on the increase over the last few years.

In the year to September last year there were 1.7million cyber-attacks on adults in England and Wales.

And she said the overall cost of computer misuse incidents against individuals, including hacking into personal computers and email accounts and stealing of personal data and imagery, has been estimated at over £1 billion.

She said: “These are not just statistics.

“The impact of these breaches and attacks have a profound and lasting impact on people and their lives and livelihoods.

“These crimes are not victimless. They cause real harm to people and businesses.

“One of the biggest challenges we face in tackling these threats is the breadth of ways in which they can manifest themselves, often causing both financial suffering and long term damage.” Scammers cost adulst in England and Wales £1bn a year

She added: “It is critical that Government has all the right levers available to ensure that those who commit criminal acts in cyberspace are effectively investigated by law enforcement, and prosecuted by our criminal justice system.

“Including those perpetrating the most heinous and appalling crimes against children or those committing serious fraud.

“The Computer Misuse Act has proved to be an effective piece of legislation to tackle unauthorised access to computer systems, and it has been updated a number of times to take account of changes we now face.

“Alongside the Act, there is also separate legislation that provides powers for law enforcement agencies to investigate both cyber-dependent and cyber-enabled crimes.”

The Home Office will also make sure Brits tech – from PCs, tablets and smartphones – is protected from not only criminals but dodgy states like China, Russia and Iran.

Ms Patel said she would be “protecting and promoting our interests in cyberspace, while also detecting, disrupting and deterring our adversaries.”

Brexit news: Latest updates at 5am from the last 12 hours